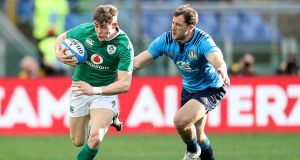 Comparisons are inevitable, if odious. No less than when he sashayed through for his first Test try against Australia last November, so Garry Ringrose drew comparisons with the most celebrated outside centre off the Blackrock-cum-Leinster production line with his classic in-and-out line for his 45-metre finish against a wilting Italy in the Stadio Olimpico last Saturday week.

Brian O’Driscoll himself would “never do him a disservice” by drawing comparisons between himself and Ringrose, but does remember the first time he came across the younger man at an Ireland squad session during the 2014 Six Nations.

“He was just coming out of school and he was part of the under-20s. They came down to train in Carton House and I think you could tell immediately that he had something different from the rest of his counterparts or his peers. He just had a rugby intellect as to what lines to run. He’d nice hands. I remember him standing out.

“I think when you’re focused on playing one of the Six Nations team you can only pay so much attention to the under-20 opposition but I do remember vividly thinking that this guy has got something special. And then I couldn’t believe that he was back training with us later on after he had been dropped from the 20s because there were other guys being retained that weren’t nearly as good as him. So it was pretty evident.”

Ringrose was “quite wiry then”, according to O’Driscoll. He has since bulked up. “When the talent is there that’s the easier part to put on, rather than the other way around. There’s plenty of guys with lots of size that don’t have the skill-set.”

Last Friday in Monaghan RFC, Ringrose was the Irish number 13 lining up against the Irish Under-20s in an open training session.

“Any chance I got to train against JP [Jared Payne], Robbie, any of those centres, I’d always come away learning a few things and it was no different that day for me [with O’Driscoll],” he said.

As for the current under-20s, Ringrose smiled and said: “Jeez, they really stepped up. I threw an intercept there, a guy made a fool out of me so I’ll certainly learn. They really do bring the energy in front of the incredible Monaghan crowd.”

Leinster’s handsome win over Edinburgh on Friday underlined how the Irish conveyor belt has rarely chugged along so productively. Ringrose embodies this, having also been part of Ireland squads as Joe Schmidt patiently groomed him for his debut last November against Canada.

The kidney injury suffered by Jared Payne has hastened Ringrose’s education at Test level, but he has the low centre of gravity, footwork and pace in attack, and anticipation in defence to flourish.

“I feel lucky to be in the position I’m in. JP being injured is a factor, he’s recovering from his kidney injury and thankfully I got to play throughout autumn and get a run. The fact that I played two years at Under-20s, did a bit of Leinster ‘A’, a bit of AIL and managed to gradually step up instead of major jumps certainly I felt benefited me.

“Even with Joe, luckily enough I got to come into camps when I was younger and was exposed to what is required of you and what it takes, so it was gradual and I learned bit by bit along the way.”

After his debut against Canada at outside centre alongside Luke Marshall, he came on at inside centre for Robbie Henshaw 11 minutes into the All Blacks match at the Aviva Stadium when playing alongside Payne, and renewed that partnership against Australia when scoring his first Test try.

Ringrose then reprised his Leinster midfield partnership with Henshaw in his Six Nations debut away to Scotland and again against Italy, albeit he had to revert to inside centre when Henshaw went off in the 48th minute. Cue Ringrose’s second try for Ireland.

“It was lucky I suppose,” he said modestly. “A little hole opened up. My parents were over, it was special having them there and it was pretty exciting to win for Ireland in the Six Nations and get a try as well.”

An autumn series is one thing, the internecine rivalries and heat of his first Six Nations altogether another, prompting Joe Schmidt to venture that it may have “spooked” his players.

“I certainly noticed the difference. It is just a level up again from the autumn. Autumn was a test, it was new to me and then the Six Nations again had new elements to it. I wouldn’t say ‘spooked’, but it was an incredible experience and another level up.

“It almost felt like Schools Cup rugby,” he mused after giving this some thought. “You’ve played against all of them in either the Pro12 or the Champions Cup and you know them, they know you and there’s an extra bit of pressure and intensity. So, yeah, there is a bit of difference.”

This was painfully brought home in Murrayfield on opening day. “It was tough,” he acknowledged. “They’ve so many threats, especially across the backline and it showed with the tries they scored. So we learnt a lesson or two in that regard in terms of getting the width in defence so we can come off square rather than chasing out and giving them time and space. That’s what I tried to hopefully bring in to Italy and beyond.”

Under Guy Novès, it would appear that France have rediscovered their heads-up awareness to the possibilities off turnover ball, from anywhere on the pitch; a good example of this was their try against Scotland.

“They’ve got that flair, they can score from anywhere and they have the individuals to do that. So, certainly, any lapses in concentration and they’ll take full advantage of it. So we know we’ll have to be switched on the whole time for every second because they’ve such dangerous runners and that offload game as well.”

With each passing week Ringrose is breaking new ground, but while this is his first Test against France, again the system has readied him for the experience.

He played every minute of Leinster’s four European Champions Cup games against Montpellier and Castres, which yielded two home wins, and a defeat and a draw away, and also had mixed joy at under-19s and -20s level with Ireland against the French.

Describing Remi Lamerat and Gael Fickou as “incredibly strong, good ball-carriers” and highlighting the threats out wide of Virimi Vakatawa and Noa Nakaitaci, Ringrose deduced: “We’ll have our work cut out for us. But we’ll just try to manage the way they play the game as much as possible and try to impose ourselves defensively and when we have the ball as well, try and play a bit also.”