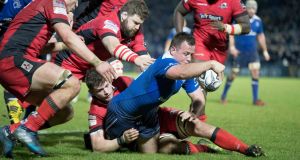 Leinster’s Bryan Byrne streches over to score a try during the Guinness Pro 12 game against Edinburgh at the RDS. Photograph: Morgan Treacy/Inpho

Ignore the details and this looks like business as usual for Leinster.

Far from it. The reverberations could damage Ireland, or scratch one decision Joe Schmidt was due to make before France arrive next week.

Josh van der Flier is struggling to feature in the rest of the Six Nations, and potentially beyond, after sustaining a left shoulder injury.

“Josh did a bit of damage to his AC joint,” said Leo Cullen. “I don’t know the severity of it. We’ll get him checked out. He just took a direct impact on his shoulder.”

There were others. Joey Carbery’s late cramp meant they finished with 14 men.

This happens sometimes in rugby. A game kicks-off, Cullen settles into his seat, with Dr Jim McShane hunched pitch side, and before either man can settle the body count is piling up.

The Leinster doctor was welcomed back from checking Dominic Ryan’s head to the sight of Van der Flier in a sling. Dave Kearney was unable to shake off a heavy collision, neither could Rory O’Loughlin.

All four victims of the opening 40 minutes – Noel Reid and Mike McCarthy were forced off while Mike Ross was hauled off as a prop finished at flanker and scrumhalf on the wing – in what was hardly a gruesome spectacle. Just the modern game played at pedestrian pace.

Edinburgh were so dire that Leinster recovered from the loss of five bodies to stroll to a bonus-point victory that puts them top of the Pro 12.

Ryan was forced off with nine minutes clocked following a concussive blow tackling fellow flanker Magnus Bradbury. Treated on the pitch, and considering his jerking movements on the ground, he did not return. There seemed no need for a HIA.

A bright spark came from Ryan’s departure. Dan Leavy’s impact was instantaneous, pilfering ball from a ruck, carrying 25 metres, offloading to Luke McGrath before a quick recycle, which Leavy engineered, and equally rapid distribution allowed Barry Daly to squeeze over in the left corner.

Carbery, in this failed place-kicking audition, was well short with the touchline conversion.

A few plays later Leinster were shorn a second flanker as Van der Flier was unable to get up after torpedoing into a ruck. The 23-year-old’s shoulder was strapped before being guided away (incidentally, Peter O’Mahony returned to full training with Ireland yesterday). Ross Moloney went to blindside as Mick Kearney settled into secondrow alongside McCarthy.

All this conspired to disrupt Leinster’s early rhythm.

Edinburgh, with a heavier looking pack, took notice. Duncan Weir – who delivered all 10 visiting points – made the correct decision more often than not as they hammered through the phases. But Leinster held firm. Even on the edges, when finally stretched, crucial interventions by Kearney and Zane Kirchner denied a certain try. That’s when Kearney was hurt. He soldiered on until half-time before Adam Byrne came in.

Edinburgh are a rabble. Weir had to direct each lumbering forward into specific positions when their driving maul inevitably broke down. The obvious one-out ball carrying eventually saw the colossal Leavy bend his back for yet another turnover.

This allowed Leinster to break out of jail and give Carbery a straightforward penalty. He got it but a glaring fumble gifted Edinburgh the ideal position to score before the break. But these Scottish visitors did well to lace their boots. Left wing Tom Brown made an awful mess of what seemed a certain try when centre Chris Dean was turnstiled into the Leinster 22. Brown dropped the ball.

Kearney felt enough for his marker to pat him on the back.

Terrible stuff all round but Leinster led 8-3 at the turn.

As an attacking entity, 15 has always been his best position. Carbery continued to serve notice of his rare talent, skipping over the gainline whenever a chink of light appeared, before his momentum carried him over the try line on 47 minutes.

“Joey managed the game pretty well before shifting to fullback,” Cullen said, “But just didn’t have the match fitness to play 80 minutes.”

Ross Byrne also took the kicking tee off him to duly miss the conversion.

No matter. Edinburgh’s feeble resistance was smashed by another Carbery finish after McGrath and Jamison Gibson-Park combined down the right wing (Kirchner was off for a blood injury and returned for the injured Reid – just one of those nights when everything but the result went wrong for Cullen).

But Leinster escaped with full marks. Daly put the bonus point in the bank on 56 minutes after a sweet cut out pass by Gibson-Park.

Leavy confirmed the rout when peeling off a maul to make it 30-3 with 14 minutes still to play. Bryan Byrne, recently returned from long-term injury, got on the scoresheet before the finish.