Joe Schmidt: Ireland 'excited about the challenge we have got'

Sexton, Kearney and Murray sit out session but target return to full training on Tuesday 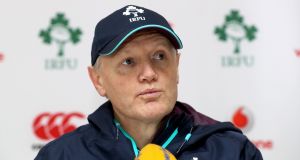 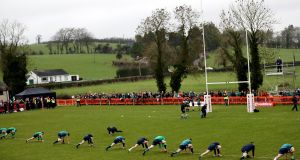 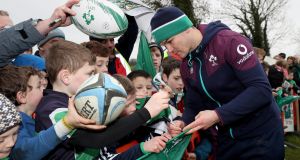 Johnny Sexton: looks to have a better chance of recovering from his calf injury than Rob Kearney. Photograph: Dan Sheridan/Inpho

There was a pep in Ireland’s step at Monaghan RFC yesterday. A better injury profile, a change of scene, a run-out against the Irish Under-20s, an enthusiastic crowd of 2,500 and, of course, a record win all help.

However, in a sense, nothing has changed. Thanks to that defeat against Scotland, Ireland are effectively entering knock-out rugby, with next Saturday’s game in the Aviva Stadium against a French side also emboldened by a win equating to a quarter-final.

Facing up to this, Ireland head coach Joe Schmidt said: “The more experiences you get in that domain, I suppose, the greater your ability to cope in those situations. We know we are under the hammer. How the players respond when they are under the hammer, we will find out a little bit, I guess.

With Rory Best, Iain Henderson, Peter O’Mahony and Andrew Trimble back in full training, 21 players took part in the three-day camp which assembled on Wednesday and trained at the Peace Link sports facility in Clones on Thursday. These also included all bar Niall Scannell of the starting line-up in Rome, as well as Jack McGrath and Kieran Marmion.

Johnny Sexton and Rob Kearney sat out training (as did Conor Murray) with Sexton doing some running and goal-kicking, and both “hitting their markers” in the hope that they will resume full training on Tuesday.

Schmidt has some welcome selection issues, especially in the backrow given the huge contribution of CJ Stander, Seán O’Brien and Jamie Heaslip in Rome, as well as Josh van der Flier, and also with the return of O’Mahony.

“Yeah, back three of the scrum and back three of the pitch,” said Schmidt, citing the form of Andrew Trimble, Craig Gilroy, Andrew Conway and Tommy Bowe, a notable absentee yesterday given he remains the only Monaghan man to have played for Ireland.

“We’ve got a few selection headaches and that’s exactly what you need. Even in the frontrow and secondrow, there are a few decisions to be made and part of that is we’ll grab the footage from today and just see how guys are going.”

At face value, Sexton looks to have a better chance of recovering from his calf injury than Kearney, who has “a tendon injury just at the base of the bicep”. If fit to play, then Sexton assuredly will play, although having started seven of Ireland’s last nine matches, Paddy Jackson has palpably grown as a Test outhalf.

“I think Johnny starts a ripple in the team. He is in a hub position, where a lot of his confidence goes through the team, and Paddy’s growing into that all the time. You don’t quite know where the overlap is, but we do know what Johnny’s done for us in the past and that stands him in pretty good stead, and we know how Paddy’s developing,” said Schmidt. He cited Jackson replacing Sexton at the end of the first quarter at home to New Zealand, as well as the Scottish and Italian games as examples.

“That experience that Paddy is getting is growing him into the leader we need, and the experience Johnny has makes him the leader that has led us so well.”

Venturing that Guy Novès’s “incredible coaching record” will afford him some time, Schmidt believes that “France are just on the cusp of really putting a team away. Now we just hope that’s not us and we’ve got to make sure that we work enough that it’s not us.

“I think there’s a sense that he’s bringing players in who are going to be really good in the future, and to be honest are really good now. I think Guy is a great guy too. I’ve really enjoyed the conversations that I’ve had with him over the years and it would be great for him if he does that. I just don’t personally want to help him with that next Saturday. We’ve got a job to do for ourselves.”

Ireland’s feel-good factor this week was also boosted by Heaslip signing a new contract until the conclusion of the 2019 World Cup.

“Jamie’s a consummate professional,” said Schmidt. “One of the reasons that he’s so resilient is because he is incredibly professional. He prepares himself, he recovers and it’s very seldom that Jamie gets caught out. He sees the game early and it allows him to get into up positions and contribute, so that has a knock-on effect on the players around him.”

“So there is a number of elements that he brings. Obviously he has a leadership role in the team, he led the team last week in Rory’s absence so all those are really important facets in the overall team dynamic, I suppose.”