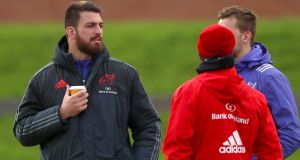 Munster’sJean Kleyn: will miss the next eight to 10 weeks with a neck injury.Photograph: Inpho

The legacy of Munster’s emphatic victory over the Newport Gwent Dragons last weekend came with a particularly costly tariff following confirmation that secondrow Jean Kleyn will miss the next eight to 10 weeks with a neck injury.

The South African has been in outstanding form for the province this season and a huge contributor to Munster’s run of eight successive victories in the Pro12 and qualification for the Champions Cup quarterfinals.

Based on the medical prognosis, Kleyn seems certain to miss the province’s European knockout tie against Toulouse at Thomond Park on Saturday, April 1st.

In the absence of Kleyn and Donnacha Ryan, the latter in Ireland camp, Darren O’Shea and Billy Holland have been tasked with powering Munster’s engine room with Dave Foley on the bench for what will be a very tough assignment against the in-form team in the Pro12.

The Ospreys have picked up a possible 28 from 30 points in an unbeaten run through the last six matches aware that a victory will see them leapfrog Munster to reach the top of the table.

Munster’s director of rugby Rassie Erasmus has made five changes to the side that beat the Dragons repatriating Irish squad members Ian Keatley, named at fullback, John Ryan and Billy Holland to the starting team. Centre Jaco Taute has also been exceptional but he too misses out through injury and is replaced by Francis Saili.

Ospreys’ coach Steve Tandy can call upon Nicky Smith, Scott Baldwin, Rhodri Jones and Sam Davies all of whom played against England in the Six Nations Championship match in Cardiff last weekend.

Tandy admitted: “It’s going to be physical, it’ll be edgy, and a tense 80 minutes. This is the kind of game that you get excited about, top of the table, on a Saturday afternoon, and with the way the two teams are playing you’d expect that to be reflected in the stadium with a passionate crowd getting behind the teams.”

This is yet another honours level examination for this group of Munster players, both individually and collectively, and a win in the circumstances and without their starting Ireland players would rank every bit as favourably as most of what they have accomplished since October.

The performances of players like Darren Sweetnam, Rory Scannell and Jack O’Donoghue to highlight, three young players, could have wider ramifications. The bookmakers have the Ospreys as one-point favourites. It reinforces the respective form-lines going into the match, but Munster will take heart from the fact that they have won twice in their last three matches at today’s venue.

The home side is a closer approximation to full strength, relatively speaking and that may just see them squeak home.