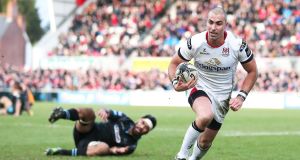 Ruan Pienaar runs in for a try during Ulster’s Guinness Pro 12 game against Glasgow at Kingspan Stadium. Photograph: Darren Kidd/Inpho/Presseye

Whether Ulster can ultimately do enough to snatch themselves a top four finish is still very much a work in progress, but there is no denying the sense of momentum now coursing through their veins.

A second bonus point win in succession certainly has Les Kiss’s now fifth-placed squad, who still have a game in hand, believing they can overhaul the Scarlets - who are six in front - and with Ruan Pienaar restored to full health again it seems that anything is possible.

The soon to depart South African shone throughout, on his first game back since New Year’s Eve following minor knee surgery, but his 52nd minute bonus-point securing touchdown has surely already taken full ownership of try of the season.

After the excellent Tommy Bowe’s try-saving tackle had seen the ball break loose in Ulster’s 22, Pienaar began, and finished, an 80-metre break out which saw the ball moved through nine pairs of hands.

And that wasn’t all as he also kicked three conversions and two penalties, for a personal haul of 17 points, and was also the creator of two other tries as the home side crossed the Glasgow line five times.

Though Pienaar clearly stood out - he played the second half at 10 - this was by no means a one-man show against an internationally-diluted Warriors side as fellow South African Marcell Coetzee’s second game for the province was another tour de force while Chris Henry, try scorer Bowe and Jacob Stockdale - who ended up with a brace - also made hefty contributions.

“I think Ruan’s class always tells,” said Ulster director of rugby Kiss whose side have now enjoyed maximum point victories over Edinburgh and Glasgow and now face Italian opposition in their next three games.

“It’s the catalyst for a lot of good things that we do.

“As you can see what he can deliver is important for us.

“But we know we have to move on,” Kiss stated in relation to Pienaar having been refused a contract extension by the IRFU after this season due to national succession policy at scrum-half.

“But I think the most important thing is that it’s becoming acute to him what this year could possibly represent and he wants to finish on a high,” Kiss added while scotching any notion that the IRFU might do a U-turn regarding the Springbok.

Ulster led 15-5 at half-time after Bowe and Sean Reidy’s scores and then stretched things early in the second half with the first of two tries from the impressive Stockdale.

Pienaar’s length of the field try followed next with Stockdale and, indeed, Bowe prominent in the surge out of Ulster’s 22.

With the bonus point secured, and injuries creating mayhem for both sides, the Warriors clawed their way back with three tries to close Ulster’s lead to 30-17.

This was no mean feat as lock Scott Cummings’ brace - he actually failed to ground his first which was curiously awarded by referee Dan Evans - came after Rob Harley had been sin-binned in the 67th minute.

Faced with the possibility of surrendering a potentially ruinous two losing bonus points, Ulster found their mojo again with Stockdale kicking through and collecting to grab his second with three minutes left to extinguish Glasgow’s hopes.

Gerry Thornley on size of Ireland’s Parisian task; Son the star for Spurs again 07:48
Eddie Jones says he can’t guarantee England players will follow Covid-19 rules 06:55
Drogheda in the driving seat as Division One reaches a thrilling finale 06:00
Regionalisation may be the key as league adjusts to new reality 07:52
Damien Comer to miss another Connacht championship following hamstring injury 06:00
Here is your handy guide to sport on television this week