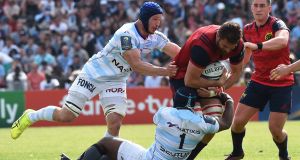 Andrew Conway - Eager to trigger something going forward and kept giving as the day is long and got his late try. But it was too late to affect the outcome. Rating: 5

Keith Earls - Not visible for most of match and gave away a cheap penalty by diving in. Was coming inside to get ball but it was not his day. Rating: 5

Sam Arnold - Brought his usual physicality and bumped his way forward a number of times. But defensively the centre and wing combinations failed. Rating: 4

Rory Scannell - A few loses passes in the first half and defensively out of shape early in the match when Thomas was on fire. Looked frustrated. Rating: 4

Alex Wootton - Again a victim of the shell shocked defence early in the match. Came across to fast to be beaten easily twice by Thomas. Rating: 4

Ian Keatley - Drop goal miss emblematic of a rough day for the outhalf. Couldn’t get anything to move and kicked to Nyanga too often. Rating: 4

Conor Murray - Appeared in flashes rather than consistently influencing. Missed Nakatawa early on and improved second half but off his best form. Rating: 5

Dave Kilcoyne - Turned over the ball in an early scrum but no real impact in the loose as the French won the breakdown in the important first third. Rating: 4

Niall Scannell - Again ball carries minimal and his throws to attacking lineouts missed a couple of times. Left the game on 42 minutes. Rating: 4

Stephen Archer - Won the first scrum for Munster but again struggled for control at the breakdown and could not make any impact. Rating: 4

Jean Kleyn - Put in a big shift even although he wasn’t going far. Got on the ball and made the carries in a difficult match for all. Rating: 6

Billy Holland - Couldn’t lead the way he likes to. The Munster forwards were just chop-tackled into ineffectuality especially in the first half. Rating: 5

Peter O’Mahony - Was held up for a try on the hour. Played an industrious more than an inspired match when Munster needed inspiration. Rating: 5

Jack O’Donoghue - Willing and was on the ball for his time on the pitch. But again outplayed by an excellent French backrow. Rating: 5

CJ Stander - Didn’t make his trademark carries into contact. His opposite number Nyanga was one of Racing’s best players. Little impact. Rating: 4

Rhys Marshall, Simon Zebo and JJ Hanrahan were the pick of the replacements. Impact is their job when they come into a game. Zebo made his try and Marshall showed some fight and energy and scored a try. Hanrahan brought some tempo to Munster’s game when he came on for Keatley. Ratings: 6

Head coach - Johann van Graan is a straight talker and will take some of the blame for that opening 21 minutes where three tries were scored and a defence too easily opened. Rating: 4