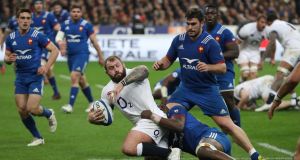 Joe Marler has come out of retirement to be named in England’s Rugby World Cup training squad, while Danny Cipriani has also been included in the 35-man roster.

Harlequins prop Marler last featured for England against South Africa on June 23rd, 2018 before retiring due to personal reasons, but has now reversed that decision.

Gloucester’s Willi Heinz has won the battle for inclusion at scrum-half, with Saracens’ Ben Spencer also included, but Wasps’ Dan Robson has missed out.

England’s most-capped full-back Mike Brown has been omitted, while Harlequins prop Kyle Sinckler is back in the squad after a hamstring scare.

“I saw Joe during the Barbarians’ week and he indicated that he had a desire to come back,” said head coach Eddie Jones, of Marler.

“We have since had a couple of chats and we have given him the opportunity to do that. Now it is up to him to show us what he has got.

“We can’t wait to have the full squad in place and to have players competing for those (final World Cup) 31 places.

“It is a process of building the team up, building the cohesion, the tactical understanding of the team and our adaptability. We will need to get those things right to win the World Cup, and that is our aim.”

England must submit their final 31-man World Cup squad on September 2, before kicking off their tournament against Tonga in Sapporo on September 22.

England now have their full contingent assembled however, and will ramp up their preparations.

Jones’ men face Wales twice, Ireland and Italy in four warm-up matches in August and September, before jetting out to Japan.

Now the 31-year-old has the chance to push for a final World Cup place.

“World Cup selection is a four-year process; we have looked at the squad carefully, tried to build up a squad that has enough experience, attitude and energy to be winners and I think we have that,” said Jones.

“In the process, we have left out some players who can feel unlucky.

“For those guys who have missed out, the door is never closed but they have just got to be ready, as you never know when the opportunity comes.”