Vern Cotter: ‘It’s a huge weekend in the championship, we’re still right in the mix’ 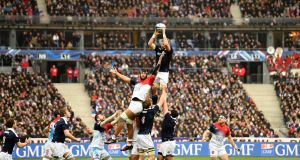 Flanker John Barclay will captain Scotland for the first time in seven years in their Six Nations clash with Wales at Murrayfield on Saturday, taking over from injured scrumhalf Greig Laidlaw.

Scotland coach Vern Cotter revealed five changes from the side who lost 22-16 in France in the team he announced on Thursday.

Ali Price will make a first international start as replacement at halfback for Laidlaw, who will miss the rest of the tournament with an ankle ligament injury.

Gordon Reid has been included at loosehead prop in place of Allan Dell, who drops to the bench, while John Hardie will take over the number seven jersey from Hamish Watson in a second tactical switch by Cotter.

Thirty-year-old Barclay will captain the side for just the second time, having previously led Scotland against New Zealand in 2010.

“John has played a vital role in our leadership group and has led by example throughout this and previous campaigns,“ Cotter said in a media release from the Scottish Rugby Union on Thursday.

“It was disappointing to lose Greig. However, we continue to develop a system of shared leadership in this squad, which has supported this transition. It’ll be a proud moment for John and one which he thoroughly deserves.”

Cotter believes his side are still championship contenders this season, having beaten Ireland 27-22 in their opening-round match, but knows a win over Wales is vital.

“We’ve now had two weeks to recover, reflect and prepare a new game plan for Wales,” he said. “We know the Welsh will throw everything at us but we will keep our attacking mind-set and look to convert pressure to points as often as possible.

“The players have worked hard to prepare for this game and are really looking forward to putting in a top performance. It’s a huge weekend in the championship and we’re still right in the mix.”