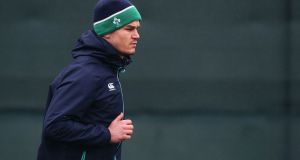 Blessed with his healthiest injury profile in quite some time, Joe Schmidt could restore Jack McGrath, Rory Best and Johnny Sexton to the starting line-up which kicked off the 63-10 record Six Nations win over Italy in Rome last time out when the Irish head coach announces the team to face France on Saturday at the Aviva Stadium on Thursday.

After returning to full training this week, Rob Kearney and Conor Murray are also expected to be named again, while a further three players are likely to be recalled to a strong-looking Irish replacements’ bench as well with Iain Henderson, Peter O’Mahony and Andrew Trimble all restored to the match-day squad.

It would be Sexton’s first game in five weeks since a calf strain ended his night in Leinster’s European Champions Cup draw away to Castres, and his first game for Ireland since he was also forced in the first half of the return meeting with New Zealand in November due to a hamstring strain.

Well though Jackson has played when starting five of Ireland’s last seven games – landing 27 of his last 28 place-kicks in Test matches – aside from his superior game and greater experience, Sexton has proven his ability to return to demands of Test rugby from a lengthy lay-off.

He did the same at home to France in the second round two years ago after a 12-week lay-off when landing five penalties from five in Ireland’s 18-11 win.

Best’s remarkable run of 51 consecutive Six Nations matches came to an end in Rome when he was ruled out with a stomach bug, and his return means his debutant replacement, Niall Scannell, will revert to the bench.

It is a close call between Jack McGrath and Cian Healy, but having stated that each loosehead would receive roughly the same amount of game time in the opening two rounds, it seems likely that Schmidt and his coaching group will restore McGrath to the starting frontrow, thereby keeping Healy’s impact in reserve, while also mindful of France’s very strong frontrow trio off the bench.

Although the fit-again Henderson is back in the frame, it seems likely that Donnacha Ryan’s experience, lineout skills and mauling work will be retained with, similarly, Henderson’s impact kept in reserve.

Likewise, following the loss of Josh van der Flier, Peter O’Mahony is also good to go after a full week’s training. It seems highly unlikely that any of the starting backrow in Rome could be dislodged given their huge contributions.

Were Trimble recalled to the bench ahead of Craig Gilroy, it would assuredly be the first time that a replacement would have to make way after scoring a hat-trick. But Schmidt is a huge admirer of the more experienced Trimble, not least his abilities in the air and his positional play.

Schmidt will also have strongly considered recalling Trimble, outstanding in the title-clinching win over France three seasons ago, but again this would be extremely harsh on the in-form Keith Earls and Simon Zebo.

Meanwhile, as well as being unusually well prepared, the French coach, Guy Novès, is expected to name an unusually settled French side on Thursday, with potentially only two enforced changes from the side that started both the 19-16 defeat away to England and the 22-16 win at home to Scotland.

The other enforced change Yoann Huget promoted to the wing for the injured Virimi Vakatawa. Otherwise, it is conceivable that the other 13 members of the starting line-up will start their third game in a row, and with a largely unchanged bench as well, although there is a feeling that the more effective loose game of Eddy Ben Arous will be preferred to the stronger scrummaging of Xavier Chiocci on the bench.