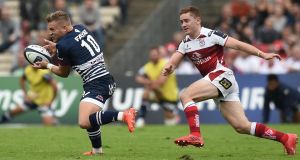 Ian Madigan wants to come home. Two weeks ago he walked into the office of Bordeaux-Bégles president Laurent Marti to discuss a potential break from the second and final year of his contract.

Marti has kept the 27-year-old on the long finger ever since. Speaking as an ambassador for Electric Ireland, who sponsors the Ireland under-20s, Madigan addressed the situation on Wednesday in detail.

The meeting with Marti was a “private conversation” but nothing stays under wraps in France. That’s the beauty and terror of life in the Top 14 – a vastly different environment as Madigan, like Johnny Sexton before him, is discovering to the detriment of his international career.

“I made it clear at the start of the meeting that I want to make things work, that I want to stay in Bordeaux but there were certain things I wasn’t happy with in the club.”

This may resolve itself organically or become another cautionary tale about greener grass. Madigan’s main problem is selection. He’s currently the understudy of 23-year-old Kiwi Simon Hickey.

“As things stand, I’m on a two-year contract and I still really want things to work there. It’s a really good team, I’m enjoying the lifestyle over there, but I ultimately felt there has been a loss of confidence from the coach [Raphaël Ibañez] in me personally and I felt I had to act upon it.”

Madigan stated that the strength and conditioning set-up at the club contributed to his groin injury in November. He also disagreed with Ibañez’s decision to rotate the squad for Champions Cup matches and believed it cost them qualification from their pool, while the imminent release of Wallaby legend Adam Ashley-Cooper has led him to question Bordeaux’s ambitions.

“One of the big reasons that I joined the club was Adam Ashley-Cooper is there. I talked to him at length before I joined and he ended up advising me, improving my game while I’ve been there. It’s very disappointing to hear that he hasn’t been extended by the club and it makes me question where their ambition is on that front.

“It was one I didn’t really understand. He is vital for our back play. He is always inputting ideas and strategy and he’s our top try scorer.

“He is the kind of guy who makes you feel very good about yourself and the kind of guy you want to play alongside. And that is felt throughout the club by both the international and French players. They really enjoy playing alongside him, he is a vital part of the club, so when it was learned that he wasn’t being kept on it was a blow to everyone.”

And it prompted Madigan to see whether Marti will allow his agent, Ryan Constable, and begin advertising him to English Premiership clubs or the IRFU.

It was put to Madigan that relations with Ibañez’s backroom team – which includes Émile N’tamack and Joe Worsley – could be damaged beyond repair by going over their heads to the president.

“It was certainly a risk but I wasn’t going in there to the president to criticise the overall system or have a real go at the coaches. That wasn’t it. It was an open conversation, you know; ‘Is this working on your part, is this working on my part?’ and ultimately about trying to get solutions. It wasn’t to see the exit door.

“The easy thing would have been to sit back and say ‘Ah, I’m on a two-year contract, I’ll catch form next season’ and let this season go. That’s just not in me. I want to fight for every selection while I’m over there. No different from when I was in Ireland.”

Be it this summer or in 2018, Dublin is ultimately where he wants to be.

“A return to Leinster would no doubt be top of my list . . . but I would certainly be open to playing for any of the provinces.”

Madigan is in international exile. Ian Keatley’s availability outside the week of Test matches was the reasoning provided for the Munster reserve’s selection as outhalf cover for Paddy Jackson against Scotland and Italy.

“Yeah, a move back to Ireland would certainly excite me,” Madigan added. “There’s no doubt in my mind about that. Playing for Ireland is still the ultimate for me.”

3 Chelsea win at Liverpool to move into top four