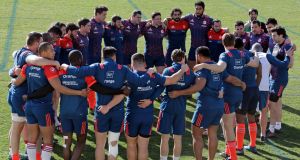 There are three changes to the French team to play Ireland on Saturday. Photograph: Reuters

France have made three changes to their starting line-up for the RBS 6 Nations clash with Ireland at the Aviva Stadium, the French Rugby Federation has announced.

New Zealand-born wing Vakatawa has a thigh injury while Atonio makes way for Slimani, who scored a try against England in the narrow defeat at Twickenham.

Backrow forward Goujon has been ruled out of the rest of the tournament following a clash of heads in the match against Scotland.

The 27-year-old La Rochelle flanker fractured a bone in his sinuses which ruled him out for at least a month.

Racing 92 centre Henry Chavancy is called up to the bench along with flanker Charles Ollivon, prop Eddy Ben Arous and wing Djibril Camara, but there is no place for juggernaut centre Mathieu Bastareaud, who misses the Ireland match after suffering a concussion.