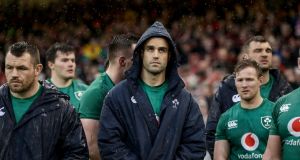 As the old maxim goes, it’s not how you start, it’s how you finish and never has that seemed truer than at the Principality Stadium on Saturday.

In truth, of course, Ireland didn’t start their defence of the Guinness Six Nations particularly well but in keeping their worst until last in Cardiff, the ramifications could be very damaging.

Whereas now it is Warren Gatland’s team will move on to the warm-up matches and the World Cup on the crest of a wave, à la England in 2003, Ireland finished the championship well beaten and crestfallen.

As Joe Schmidt was entitled to remind us all in urging Irish supporters to keep their faith in this team, Ireland have won 21 of their last 24 matches. After making 2019 the greatest year in the history of Irish rugby and winning three of the last six Championships, these players and these coaches have plenty of credit in the bank.

That said, this was a bad day collectively and for all of them individually, probably the worst in Schmidt’s high achieving tenure and, as he had agreed at the Six Nations launch, this tournament always held the risk that Ireland might lose the momentum built up last year.

However, he countered that in the aftermath of this chastening defeat by maintaining: “There is a risk and at the same time there is a responsibility to take a risk and we took a risk through the championship. And we took risks putting different guys in and trying to find out a little bit about guys.”

Citing the example of Tadhg Beirne and Kieran Marmion on Saturday, which took to 36 the number of players used by Ireland in this Championship, Schmidt added: “Earlier in the tournament we got to look at a number of players and I don’t think we did in 2015, and people will be quick to point out 2015 when we lost five of our very best senior players that there wasn’t much sympathy for not performing in the quarter-final.

“So I guess one of the things is that in trying to mitigate that, you have risk something somewhere else. At the same time, there is no way we wanted to come here and lose.

“We didn’t want to lose at home to England either. So we are hurting, it is a hollow feeling when you lose a game like that and it is frustrating but if, in hindsight, in November, we can say, ‘well I am glad we did and I am glad we tried to build and widen and lay a foundation’ then we have three of the last five of these things and we got our Grand Slam last year.”

With all four Irish teams competing in European quarter-finals which have been corralled into the seasonal itinerary with indecent haste a fortnight hence, the provinces will now have to pick up the pieces.

“I think for us, it will be about heading off to the provinces, dusting themselves off, getting some confidence through their provincial performances which are usually of a really high standard and then we will get back together,” said Schmidt.

“It is pretty hard to contextualise everything in terms of one game. I know what it was like going to Twickenham last year and how energized the whole group felt and then we got that early try and then on the back of that we built that first half lead, and it was impossible for a good England team to get back into the game.”

“We are a good Ireland team and we will be good and I would just ask the people ‘keep the faith with the team’ because we will remain competitive at the top level. I know it’s a long way off for us to get the opportunity to demonstrate that but we will try to build a rhythm and clarify exactly who we need in the group and progress from there.”

From a previous position of relative serenity and certainty, not least about the vast bulk of Ireland’s 31-man World Cup squad, its make-up looks more uncertain now.

Asked if his World Cup squad might look different now at the finish of the Six Nations that it did at the start, Schmidt said: “No it is too early to tell. We will certainly be watching the last two months of the season and the other thing is, you don’t know who is going to be fit and able, so we are very open-minded still but we feel at the same time, we have made an investment in what we are trying to do, going forward.”

Ireland host Italy on August 10th, head to Twickenham a fortnight later and then meet Wales on successive Saturdays, back here and in the Aviva Stadium, before their next competitive game in that pivotal pool opener against Scotland.

And, of course, Scotland didn’t finish the Championship too badly either, did they?