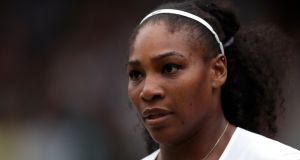 The Australian Open could take place without a host of top players following a series of injuries and withdrawals ahead of the season-opening Grand Slam. Photo: Adam Davy/PA Wire

Serena Williams has told of the health complications she faced after giving birth to her daughter last year, which included an emergency Caesarean and surgery for blood clots in her lungs.

The tennis ace, who appears on the cover of US Vogue magazine with her baby daughter Alexis Olympia Ohanian Jr, has also said she has lost count of the number of times she has “broken down” in tears since becoming a mother, and that the emotions are “insane”.

Williams, 36, and her husband Alexis Ohanian, 34, welcomed their daughter on September 1st.

The sports star told the fashion magazine she had to undergo an emergency C-section due to her heart rate dropping during contractions and that the first moments of motherhood were “amazing”.

She added: “And then everything went bad.”

Williams revealed that, the day after giving birth, she had started to think she was suffering from a pulmonary embolism — a blood clot in the lung — something she has previously experienced.

Williams, struggling for breath, alerted a nurse and was quickly given an ultrasound scan by a doctor.

She told Vogue she recalls telling the medical team: “I was like, a Doppler? I told you, I need a CT scan and a heparin drip.”

Within minutes, she was hooked up to a drip, and she said: “I was like, listen to Dr Williams!”

In the six days that followed, Williams’s C-section scar split open due to her coughing, brought on by the pulmonary embolism.

She also had to undergo surgery to have a filter inserted into a major vein to prevent further clots, and was forced to spend six weeks in bed after returning home from the hospital a week after the birth.

Ohanian said: “I was happy to change diapers, but on top of everything she was going through, the feeling of not being able to help made it even harder.

“Consider for a moment that your body is one of the greatest things on this planet, and you’re trapped in it.”

Williams said, of the first few months of motherhood: “Sometimes I get really down and feel like, man, I can’t do this.

“It’s that same negative attitude I have on the court sometimes. I guess that’s just who I am.

“No one talks about the low moments, the pressure you feel, the incredible let down every time you hear the baby cry.

“I’ve broken down I don’t know how many times. Or I’ll get angry about the crying, then sad about being angry, and then guilty, like, why do I feel so sad when I have a beautiful baby?

“The emotions are insane.”

Williams, who married Reddit co-founder Ohanian in mid-November, last week withdrew from the season-opening Grand Slam in Melbourne and will not defend the title she won in 2017, due to needing a “little more time” before returning.

But she said she hopes that having her daughter might help her in her athletic career going forward.

Speaking of her aim to win 25 Grand Slams, Williams said that “having a baby might help” her to relax.

“When I’m too anxious I lose matches, and I feel like a lot of that anxiety disappeared when Olympia was born,” she said.

“Knowing I’ve got this beautiful baby to go home to makes me feel like I don’t have to play another match.