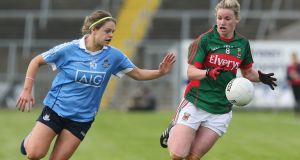 Fiona McHale: “I absolutely love the game. When I went travelling I genuinely missed it. . . I couldn’t imagine life without it.” Photograph: Lorraine O’Sullivan/Inpho

It’s not all that often that Fiona McHale has the time to turn on the television and unwind for a bit, her sporting and work commitments gobbling up the bulk of her days.

She managed, though, to steal some time recently so she flicked on TG4. It was the last five minutes of September’s All-Ireland final, when she and her Mayo team-mates were put to the sword by Dublin.

She laughs at her misfortune.

Did you watch it?

If her luck had been in, she might have happened upon a repeat of December’s All-Ireland Club final, a day that might not have quite erased the memory of that defeat by Dublin, but one that gave her and her Carnacon team-mates a joyous end to 2017.

While most of the focus was on her captain Cora Staunton, who was heading for Australia two days later to start her spell with Greater Western Sydney Giants, it was McHale who shone brightest at Parnell Park.

She won the Player of the Match award – just as she had done in the replay of the Connacht club final, before producing another outstanding display in the semi-final win against Tyrone’s St Macartan’s.

Having missed Mayo’s league campaign earlier in the year, taking five months off to do some travelling, she reckons she was only reaching peak fitness towards the end of Carnacon’s Championship run, which might account for her indefatigable performances in midfield. The 30-year-old PE teacher drove the team on to their first All-Ireland title since 2013, Cork’s Mourneabbey their victims this time around.

“The likes of Martha Carter, Michelle McGing and Marie Corbett all really stood up that day, any one of them could have been named player of the match. But it was a great end to the year. Between Mayo and Carnacon we experienced every emotion possible, highs and lows, but we were lucky to have the run with the club, it meant there was no time to dwell on losing to Dublin.”

Under new manager Peter Leahy, Mayo are aiming to go one better in the 2018 championship. Before that there’s a league campaign to focus on, one McHale is especially looking forward to following the announcement of eight ‘double-headers’ this season where women’s matches will precede men’s games. Mayo’s women meet the Dubs at MacHale Park next month before the men’s game between the two counties.

“That’s massive progress, it’s something we’ve been pushing for for years,” she says. “There were often situations where the Mayo men were playing in MacHale Park and on the same day we’d be playing in Swinford – with no stand. You’d be completely deflated by something like that, but the eight double-headers are absolutely huge for the game. Hopefully next year there’ll be even more. It’s common sense really.”

And as the secretary of the Women’s Gaelic Players Association, MacHale is especially invested in boosting the women’s game, her commitment to which is all-consuming. While working on the Healthy Ireland Demonstration Project at the University of Limerick (“it’s looking at improving health behaviours in adolescents”), she also plays for UL (having managed them to success in the O’Connor Cup before) when she’s not on Carnacon or Mayo duty.

“I absolutely love the game. When I went travelling I genuinely missed it. I just feel very lucky to be part of something like this and to be able to play at this level. I couldn’t imagine life without it.”

1 Gary Neville in Qatar an exercise in semi-journalism
2 Matt Williams: Expect the unexpected in rugby’s greatest tournament
3 Owen Doyle: Creeping professionalism of schools rugby a threat to the game
4 Jürgen Klopp insists Liverpool title party is not on his mind
5 Tottenham’s Christian Eriksen to make €20m move to Inter Milan
Real news has value SUBSCRIBE
Here is your handy guide to sport on television this week