Japan camp not interested in Irish complaints about referee

‘In regards to defence, it was pretty special in how they showed for each other’ 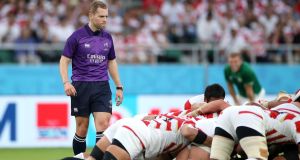 Japan’s defence coach Scott Hansen has dismissed the relevance of World Rugby’s confirmation that three of the penalties they were awarded in their 19-12 win against Ireland were incorrect.

Ireland coach Joe Schmidt had said in a press conference on Tuesday that “feedback” from the governing body had confirmed for him that three offside infractions for which Ireland were penalised had been wrong calls.

It was put to Hansen on Wednesday morning that the World Rugby revelations had contained no reference to Ireland’s Keith Earls, who might have been yellow carded for not rolling away after chasing down Kenki Fukuoka’s late intercept break. When asked if those revelations took the gloss of the Japanese win, Hansen pointedly focused on Japan’s upcoming game against Samoa on Saturday.

“Mmh. I think in regards to performance, yeah, the focus for us has to be looking forward,” Hansen said. What I would take from that at the end of the day is walking out and seeing young Japanese children hopefully inspired by our performance and that won’t be taken away by comments that we read.”

Keen to move on from the euphoria generated by their upset against Ireland, Hansen drew a line under questioning by elaborating on what most pleased him about the performance. Japan coughed up two early tries to Ireland and fell into an unpromising 12-3 situation before startling the tournament by completely reversing the momentum on the field and, in the second half, the scoreboard.

“Our ability to come from behind showed our leadership. It was outstanding. In regards to defence, it was pretty special in how they showed for each other and their attitude. Stats wise I think it was a 93 percent tackle rate and that shows the character of the team. We understand there are areas for improvement and we are excited about that.

“I think it speaks volumes for the leadership within our squad and the trust that we have. That is led by our leaders -in defence, in attack, our captain. So conversations on trust have been critical in the growth of the players as a group.”

With two wins from two games, Japan have an opportunity to top Pool D but face a new pressure now, having coped with the obligation to beat Russia on the opening night before delighting the rugby world with their win over Ireland. A failure to capitalise on their start by not beating Samoa would be disastrous.

“It was the same after the Russian game and the same now after the Irish game,” promised flanker Pieter Labuschagne.

“We focus on ourselves. Everyone wants to prepare really well so that we can perform over the week. There are a lot of people that we want to make proud, on and off the field. And we are proud to be representing them. So our focus is always on what we are going to do next.”

Japan face Samoa at 7.30 on Saturday evening, guaranteeing a huge national television audience after their heroics against Ireland.