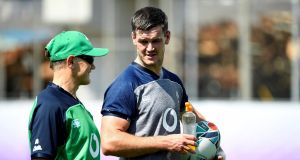 Whether or not Ireland peaked in their virtually unblemished 2018, last Saturday in Shizuoka was further evidence of how they undoubtedly became the hunted ones in 2019. England, twice, Wales and now, with a little help from Eddie Jones and England, Japan have all dissected Ireland’s game in minute and successful detail.

The net effect has been to leave Ireland looking somewhat like damaged goods going into tomorrow’s game against Russia (kick-off 7.15pm local time/11.15am Irish). Whether or not that’s true will become evident over the next two and, presumably, three weeks. Even so, Joe Schmidt’s faith in his squad has not been dented by the defeat in Shizuoka.

“No,” he began, emphatically. “I guess, before the tournament, Japan worried me, probably more than Scotland in a lot of ways because we know Scotland inside out. We had only lost one of our last seven games against Scotland.

“It was the whole equation of Japan being capable of that outstanding effort, the fact that their games are nicely spaced . . . .they are the home nation and it was disappointing when the home nation got beaten out the last time. I know that it’s a real advantage to have the host nation in the tournament because interest levels stay up and we knew that they’d be really challenging.

“I think for us, the biggest disappointment is you’ve got to have confidence after the first 20 minutes, you’ve gone down there, you’ve scored two tries, you feel like you’ve got a degree of control on the game. Our scrum’s very strong, it’s disappointing to concede that scrum penalty and the feedback is that it was a tough call. But you’ve got to get above that and continue to be positive, and I’m still incredibly positive about this group.

“They are such a good group of young men that they are determined to make sure we get it right in these next two games and then beyond that, it doesn’t matter which team you play in the Pool next door to us, it is a monumental game,” said Schmidt of that potential quarter-final against either the All Blacks or the Springboks.

“It is probably the two form teams, maybe along with England, in the world at the moment and we’d like to think we can be in that mix and we have to maintain our focus on what’s immediately in front of us with these next two games, and then attempt to really reach that level in the quarter-final.”

While again extolling Japan’s performance and appreciating what their win has done for the tournament and the country, Schmidt also revealed that in their feedback from World Rugby to their own report, three of the four offsides against them were wrong, along with that momentum-shifting scrum in the 35th minute. They’ve also been informed that several examples of Japanese side entry at ruck time should have led to Irish penalties.

This is disconcerting given two of those offside penalties were decreed by the assistant referee, Jerome Garces, who is the match referee tomorrow.

Again maintaining “you can’t take anything away from Japan” and “the intensity, the passion and the skill that they played with” Schmidt admitted: “We have our frustrations, obviously, because we want to get off the line and defend well and when you become hesitant on the back of calls that you felt at the time were tough and you start questioning when you can get off the line, it does allow a team to get that front foot.”

Acknowledging the conditions are tough for the officials too, Schmidt added: “I don’t want to be overly critical of anyone because we’re all struggling a bit with the humidity and we’re all trying to make sure that the game is as open and fast and fair as it possibly can be.”

In making 11 changes to the starting line-up, John Ryan and Jean Kleyn make their World Cup debuts, while Jordi Murphy starts at number 8 within four days of his arrival.

However, it’s once more into the breach for Garry Ringrose. With the hamstrung Robbie Henhsaw set to return against Samoa, the youngest and lightest of Ireland’s quartet of midfielders has become, touch wood, Mr Durable.

Schmidt admitted it was “a risk” to start Ringrose for the third World Cup match in a row, not to mention his seventh game out of seven, but countered:.

“We feel that Garry is fully fit and there’s less risk. The sooner we play Robbie, just with that hamstring, the more risk there is.”

With the quarter-finals also in mind, Schmidt said: “Robbie is a pretty big player for us and has a lot of respect within the squad. He’s got good World Cup experience. I thought he was phenomenal in the French game last time when we did qualify from our pool to go on to a quarter-final. For all those reasons, we kept Robbie here.”

Noting the conditions would at least be as unfamiliar for Russia, and welcoming water breaks midway through each half, Schmidt admitted: “We’re going to have to make sure we manage our bench really well so that we can share the load effectively because I do think it is going to be tiring. But we can’t be too distracted by that.”

Interestingly, Joey Carbery is covering scrumhalf from the bench albeit, as Schmidt noted, he could cover the wings, 15 and 12 as well as ‘10’, but “it would be nice to give him a little bit of time at scrumhalf, just to have him be a little bit comfortable there not having played it since he was really a schoolboy”.

1 A beautiful, happy accident - Moneyball is the best sports movie ever
2 Is it time for the New England Patriots to tear it down and start again?
3 James McClean still failing to learn his own online history lesson
4 Karen Robinson Walton: I am looking at him. I say ‘Benjamin, what have we done?’
5 Juventus players agree to waive four months’ wages
Real news has value SUBSCRIBE