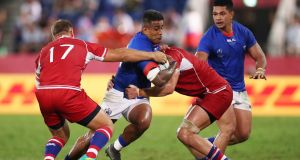 The Test has not started yet, but Scotland may have already made their first mistake. Three days ago, Greig Laidlaw decided to weigh in on the tackles made by Rey Lee-Lo and Motu Matu’u in Samoa’s match against Russia. “Clear headshots, and pretty brutal ones at that,” Laidlaw said. “Were they red cards? I think they were.”

Lee-Lo and Matu’u had both been shown yellows during the game, but had been cited afterwards and were waiting to find out whether they would be punished again. Given that, Samoa’s coach, Steve Jackson, did not much appreciate Laidlaw’s meddling. “I’ll just say thanks for doing that,” Jackson said, “because it just motivates our players a lot more.” It turned out the independent judicial committee took the same view as Laidlaw.

Jackson was angry on Thursday, when he found out Lee-Lo had been banned for three matches, angrier on Friday, when he found Matu’u had been banned for three matches too, and furious on Sunday, when he laid into Laidlaw, World Rugby, the judicial committee, and everyone else who had crossed him this week. If his team are half as wound-up as he is, Scotland are in for a rough, tough time of it on Monday night, against a team they have struggled to beat in recent years.

Scotland have won four of the five Tests they have played this decade, but the margins have been slim: three points, one point, three points, six points. Samoa won the other Test by 10. If they win again here, whatever the margin, Scotland’s World Cup will be as good as over already. In fact, given Japan’s victory against Ireland on Saturday night, Scotland do not just need to win their remaining games, but earn bonus points too. Ireland already have two bonus points themselves, and have an advantage in the tiebreaker because they beat them head-to-head.

“We watched the Japan game, we’ve done the numbers and we know the ramifications,” said Scotland’s captain Stuart McInally. “But first and foremost we have to go out and win the game. In my experience if you start out by chasing bonus points you get into trouble.”

The Scots were the only neutrals who didn’t enjoy watching Japan win. “It was a disappointing result for Scotland, but nothing changes for us,” McInally said. “The task is still the same, it’s just a little bit harder in terms of us needing bonus points, but we still need to win all our games to get out of the group.”

Of course, he believes they will. “One thing I like about this squad is we tend to get a reaction. We demand it of ourselves after a poor performance, because we know what we’re capable of and it hurts when we fall below that standard.” They have made five changes, three of them in back row, where Magnus Bradbury, Jamie Ritchie and Blade Thomson have replaced John Barclay, Ryan Wilson, and the injured Hamish Watson. “Magnus and Blade are both guys who are going to bring a real attacking presence,” the forwards coach Danny Wilson said.

“Magnus is renowned for his carrying game, he’s a big powerful man, and Blade has that ability to beat people in wider channels. So they bring an attacking presence for us. Defensively they’re both very physical which we’ll need, and they’re pretty good over the ball which will hopefully allow us to slow the opposition down, because we know they want to play a fast and physical game.” That they do. Even their little reserve scrumhalf Pele Cowley, who will be competing against his cousin Sean Maitland. “Not a lot of people know it but my mum’s half-Samoan,” Maitland said. “My grandad was born there, on Upolo, and emigrated in the 60s.” He and Cowley grew up together in New Zealand.

“It’s pretty crazy where rugby brings you,” Maitland said. “It’s special for the family, there’s a big contingent coming over, so I hope he gets on and I get one up on him.”

Jackson has certainly got a warm reception planned. Laidlaw is on his hit-list, for sure. “There’s obviously been a lot in the press, with people making things a little bit worse than they already were before the hearing,” Jackson said.

“Things put in the media by people in the Scottish squad, talking to the referee about our tackles and all that sort of stuff.” The whole business, he said, “has certainly been a motivation for us to go out there as a group and do a job on Monday”.

As far as Jackson is concerned Lee-Lo and Matu’u did not deserve punishment worse than the yellow cards they got on the night. Which is why he’s promised that “we’re going out there with the same mindset, the same attitude, the same commitment, and we’ll see what happens”.

Jackson’s main complaint is that Lee-Lo and Matu’u received the same sanction as the USA’s John Quill did for his hit on Owen Farrell. Quill’s was a stand-up shoulder charge, and he admitted it was a reckless act of foul play worthy of a red card. Matu’u and Lee-Lo were both bent low and insisted they had been making legitimate attempts at tackles which went wrong when the ball-carrier ducked in the split-second before contact. The judges seem to have set a standard, Jackson said, and given they are handing out blanket three week bans it was “going to be very, very interesting” to see what happened with Piers Francis. “We just want to see some consistency.”

Hours later, it emerged that Francis had got off scot-free.