Michael Cheika’s Wallabies ready to bring the fight to Wales 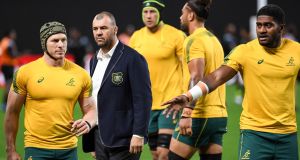 Australia’s head coach Michael Cheika with his players before their clash with Fiji at the Sapporo Dome in Sapporo, Japan. Photograph: Getty Images

Michael Cheika was in Dublin last summer. Not much happened in and around Leinster’s 10-year anniversary celebrations of their first European title, back when the gnarly Randwick bruiser was at the helm.

As the light declined Gordon D’Arcy sidled over to his former coach.

“How you going to handle losing Izzy Folau?”

The wink, the nudge. “Us versus everyone else” could be embroidered on the lapel of the clothing line Cheika possibly launches when he’s done inspiring egg chasers.

The current Wallabies understand what D’Arcy’s Leinster discovered in 2009. Cheika specialises in moments of crisis. He craves adversity.

If anyone else brought James O’Connor back from his arctic winter – after the former teenage sensation’s alcohol-fuelled downward spiral – you’d call them a lunatic.

O’Connor is hardly a like-for-like Folau replacement – it doesn’t exist – but he softened the blow.

Another masterstroke was needed after Reece Hodge’s three-week suspension for the concussive hit on Fiji’s Peceli Yato. What does Cheika do (besides screaming blue murder)? He goes back to his old guard of Adam Ashley-Cooper and Bernard Foley at outhalf.

The Ashley-Cooper selection, while forced upon Australia, should work out but Foley’s recall smacks of desperation.

The Wallabies have not been able to unearth halfbacks to hold pace with modern heavyweights. Will Genia returns at scrumhalf.

Australia, on paper, lack the quality to topple the Grand Slam Welsh never mind becoming serious contenders for the World Cup. Right? Never forget 2015. It took a perfect Sonny Bill Williams offload and phenomenal Dan Carter drop goal to see them off in the final.

And now, on the eve of what is unquestionably the Pool D decider, Cheika has his much-needed cause. He probably burst out laughing practising these quotes in the mirror.

“We are not going to let them get to us,” he said of the disciplinary process. “I do not care what World Rugby are doing. If there is one bloke they are not listening to it’s me, no matter what language I speak to them in. I am respected by my players and together we will battle away.”

Players fear and love Cheika in equal measure. After an awful 18 months Australia sparked to life pre-tournament with victory over New Zealand in Perth. No team can cope with losing a lock like Scott Barrett. The Wallabies were blessed against Fiji that Hodge wasn’t red carded. They should be under siege, facing elimination, but instead they come out swinging.

Only one man does it better. Warren Gatland has named an unchanged team, fully unified after wiping the floor with Georgia last Monday, having so cleanly turned the page on the Rob Howley betting scandal.

Where Cheika wreaks wonderful havoc, Gatland calmly sits before the assembled media and stirs the pot.

“Without [Kurtley] Beale they lose a bit of their attacking threat.”

A spectacular Test match is promised at Tokyo Stadium to match the Springboks and All Blacks, if not in physicality, then intensity.

Pray for the most exposed man on earth. Romain Poite has the whistle.

“We’re very comfortable with him refereeing us,” said Gatland. “He’s refereed on Lions tours as well so I’m very familiar with him.”

The breakdown will be a swamp.

“We did a good job last year on Hooper. He had about 12 attempts against us trying to steal the ball and he did not get any. Pocock was a different story. He had about 10 attempts and got about five. He is a big threat and it is something we must focus on.”

Justin Tipuric and Josh Navidi effectively tallies four opensides on the pitch. Chaos is a ladder.

Alun Wyn Jones, on cap 130, to guide Wales to victory.