Questions on salary cap breaches off limits at Saracens

European champions in no mood to surrender their trophy 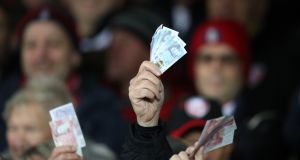 Saracens will begin their defence of the European Champions Cup at Racing 92 on Sunday without most of their England World Cup players, but Alex Lozowski warned that they were in no mood to surrender a trophy they have won in three of the last four seasons.

The holders held a media conference at their training ground in St Albans one week after failing to turn up for the launch of the Champions Cup in Cardiff. That event was held the day after the club was docked 35 Premiership points and fined £5 million (€5.8 million) for breaching salary cap regulations and reporters were told by a representative from a communications company hired by Saracens that questions on that subject were off limits, including when the pending appeal would be lodged.

The club’s director of rugby, Mark McCall, said in an earlier, separate interview with BT Sport, he understood the criticism Saracens had received but pointed out the details of the salary cap breaches had not been disclosed. “Things are never as black and white as they are and I am sure the full facts will come out in due course,” he went on. He has this week held talks with his six players who were involved in England’s World Cup final with South Africa and few are likely to travel to Paris.

The Champions Cup organisers changed the rules for this season to allow clubs to swap up to five players after last month’s registration deadline and deal with World Cup fall-out. The only change Saracens made was to replace the prop Ralph Addams-Hale who suffered a season-ending injury at Gloucester last weekend.

“We take the Champions Cup very seriously and we are going to Paris to win‚” said Lozowski, the centre who helped turned around last May’s final against Leinster in Newcastle. “It is hard to avoid what is being said about us on social media, but it does not bother me and is quite amusing to read. Teams want to beat us because we are the champions, but what has happened this month has made the target on our back a little bigger.

“It is something we can deal with. Ever since I have been here, we have been universally disliked. We are proud of what we achieved last season [the Premiership and European double], and we are not going to lie down and give the Champions Cup away. The points deduction means it will be difficult this season, but Saracens are going to win championships again. We all care about this club so much that what has happened will not affect us in the long run. Looking to the future, there is a lot to be positive about.”

If Saracens appeal against the points deduction and fail, their only route into next season’s Champions Cup, assuming they remain in the Premiership, would be by retaining the trophy. McCall said he would not be rushing back his World Cup final players because of the physical and emotional toll the tournament and its build-up took on them.

“I do not think it is realistic to expect players to jump from being away for five months into something completely different,” he said. “We would have to tell them that playing against Racing is the biggest game - two weeks after they played a World Cup final. We have had individual conversations with players to see how they feel and make decisions with them rather than for them about when they come back.

“Different decisions will be made for different players. A few have been training this week, but I do not want Racing to know our team before it is named on Friday. Everyone talks about player welfare and we have to be genuine about it. I remember being on Ulster’s coaching team in 2003. We played Leicester who had all their England players two weeks after they won the World Cup and, even though we were not the most formidable of sides, beat them by 33 points. That has remained with me.”

McCall said he had had a long conversation with the England captain, Owen Farrell. “He shouldered a lot of responsibility in the World Cup. I do not know what it is like to lose a World Cup final and we have to give him as much time as he needs to come back refreshed and relishing playing rugby again.” - Guardian