Irish players walking around like bears with sore heads

‘They understand why, as individuals and collectively, certain things happened’ 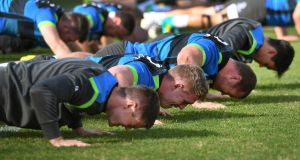 The Irish team have been feeling the pain of defeat this week. Photograph: Getty Images

This Irish squad had lost that losing feelin’, so to speak, over the last 15 months but re-acquainting themselves with the bitter taste of defeat for the first time in 13 matches has, according to defence coach Andy Farrell, made their mood darker. At least they have this week to put this to right but the trick, he maintained, was reining them in.

In the aftermath of last Saturday’s 18-9 first test defeat to the Wallabies, Farrell said the Irish players had responded “pretty much as you’d expect a good side to take a defeat like that. They’re pretty angry, grumpy, walking around like bears with sore heads.”

“We’ve had a couple of meetings and they understand the reasons why, as individuals and collectively, certain things happened. You forge a plan and, once you have a plan in place you head forward. The key for the rest of the week is working out how to hold them back.”

In many respects, restricting these Wallabies to 18 points in last Saturday’s first test was something of an achievement, and arguably Ireland’s attacking performance came up shorter, but of course these things are intertwined and Ireland’s defence coach has no doubt they could have done better in his department, particularly as the Wallabies may be even sharper after their first hit-out in six months.

“Decent at times, but that’s not good enough at this level in the sense that they (Australia) are a very, very good attacking outfit. We knew that before the Test. We knew that they would be very hard to contain. It felt like we did that by and large, but you’ve got to be consistent with it.

“They hit you on the break very well. They play quick, especially at the breakdown, etc. We’ve things to work on, but by and large to keep them to a couple of tries - albeit get away with a few that were disallowed - isn’t too bad because Australia are pretty used to scoring tries. We need to do better at the weekend, there’s no doubt about that,” he said in reference to Saturday’s second test in Melbourne’s AAMI Park (kick-off 8.05pm local time/11.05am Irish).

Robbie Henshaw was as critical of himself as any analyst for shooting out of the line on a few occasions, and with some cost, albeit he last played at outside centre against Italy in February, before returning at inside centre for Leinster in the European Champions Cup semi-final and final.

Having missed Kurtley Beale, he and Ireland were indebted to Jacob Stockdale’s covering tackle on Marika Koroibete, but when Henshaw subsequently didn’t trust Iain Henderson on his outside, and left Jordan Larmour isolated on the wing, Bernard Foley then moved the ball on in the build-up to his try.

There was a third example too nearing half-time which almost led to an intercept by Jordan Larmout but instead led to Koroibete making yards up the touchline, but with regard to the Foley try, Farrell said: “Defence is like attack, it’s about decision-making. You back your players to make good decisions by putting them in those situations to make good decisions in the first place. But we were a bit too trigger-happy.”

"We know that Australia like to, at times, go away from the flat attack that we’ve all been so used to seeing them do over the last few years. We’ve seen from time to time that, with line-speed, they’ll sit back that little bit deeper and entice you to come that distance that you don’t want to come and they’ll pick you off on the edge. We felt that it was a gamble that wasn’t quite on the money there.”

To a degree, Farrell agreed this was a collective failure in communication. “He’s got a winger that’s just sitting off a little bit and becomes disconnected. The communication, they say, was there but obviously not communicated well enough.

I suppose the crowd noise, etc, has something to do with that. I thought Iain Henderson was doing pretty well on the inside and I’d back our players to make good decisions and at this level you’ve got to nail them 100 per cent. We were slightly off. Robbie is normally one of the best in the world.”

Had Henshaw’s read come off, it is a great read. “It is and you applaud it, but he didn’t. We didn’t and they got on the edge of us. How do we learn from that? Probably in how we get to the space as a collective is something that we’re working on.”

The disallowed Israel Folau try from a turnover, when Kurtley Beale shimmied acrossfield and drew in three forwards _ James Ryan, Tadhg Furling and Sean Cronin _ also demonstrated the need for Ireland to transition quicker and more effectively from attack to defence.

“Obviously don’t give them access in the first place, but those type of things happen,” said Farrell. “This is top, top level Test match rugby, playing in Australia against one of, if not the, best attacking side in world rugby. From time to time you are going to get your front-row in a position where they won’t want to be and, at this level, they are going to have to deal with it.

“We had good enough numbers on our feet, but we backed off on an edge and when you back off and you have the pace of Kurtley Beale floating across, trying to pick off people who are knocking off slightly, that’s what happened.”

Then there’s Folau’s peerless aerial threat, a tactic which in the aftermath of the first test, Beale said would be continued.

“Obviously, they had a plan and it was a great plan and they backed themselves with it. Is it a 50-50 when the ball’s in the air with him? Probably not, he’s so good at it,” admitted Farrell.

“But there are certain things that we can do with it, you can say that you can get pressure on the kicker and we can but there are times when they are so deep that you can’t get there anyway. But it was the accuracy of how we got into the air sometimes, we let him dominate the space more than he should. He had it a little bit too much his own way.

“They position him very well and their attacking kicking game is in accordance with that. We can recognise better and make it more of a contest. Is it 50-50? Probably not, but we can make sure we’re around for the scraps if not.”