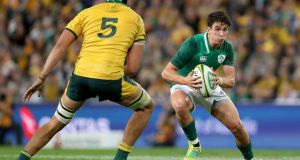 Joey Carbery will most likely return to the bench as back-up to Johnny Sexton in Saturday’s second Test but the investment in him as the long-term understudy and perhaps heir apparent to the Irish ‘10’ jersey gathered pace last Saturday.

Still only 22, he has a temperament, as well as ability, beyond his years. He’s performed credibly in cameos, from that debut in Chicago to the Grand Slam finale in Twickenham, but starting Test matches against frontline Test opposition, such as the Wallabies in Australia, will be invaluable on his learning curve.

As well as more game time for Munster, there’s scope for Joe Schmidt to give him one or two more starts in the November window, another in the Six Nations and one or two in the warm-up matches before the 2019 World Cup.

Afterwards, even in defeat, his excitement and desire for more was palpable.

His first Test at outhalf against the USA a year ago saw him charged down twice before being forced off and sent home the next day with damaged ankle ligaments. The Fijian game went better last November, but once again he went off injured, this time with a fractured left wrist.

Ireland kept a good shape in attack with Carbery running the show, his wonderful footwork launched one counter with Bundee Aki from the backfield and, save for one missed penalty and a loose pass, there were hardly any obvious mistakes before he departed the game with Ireland 9-8 ahead.

“The missed kick was annoying but I was happy with how it went, and happy to come off injury free,” he said. “It was my first game not coming off injured playing number ten. Third time lucky. Hopefully we’ll take the learnings and build. The next two weeks are exciting but I think we’ve a lot to learn.”

For Carbery, one specific ‘learning’ stood out.

“Just getting that clear calling maybe when we’re in their 22, that we need to slow things down maybe and just be patient. I think there were a few times when maybe had we been a bit more patient and not chucked an offload we could have broken them but sure look, if CJ scores that try it’s a huge change. There were a load of swings and I suppose we’ve just got to work and try and make those swings in our favour next week.”

This was also a very different experience to playing in the Northern Hemisphere.

“Definitely. It’s quicker and there’s a lot more open play. It was tough on the pitch too. A few lads were cramping as well. But it’s good to get a taste for it. Obviously we wanted a better result but I think we’ll be a lot better next week.”

There’s something about Carbery’s style which not only has its roots in the Southern Hemisphere but catches the eye of their coaches as well. Joe Schmidt clearly believes he’s a special talent, and Graham Henry having immediately identified Carbery as, ironically, Leinster’s outhalf for the next ten seasons, Michael Cheika said of Carbery after the first Test: “He’s a star.”

Cheika added: “I’ve been watching him and I went up to him after the game because I’ve never met him before and I said, ‘I love your work’ because that guy can play footy, he is an outstanding player.”

I don’t know if his missus puts him under pressure sometimes, but I know nothing gets under his skin that I can see anyway

Cheika had joked beforehand that he wouldn’t have liked being the coach who informed Sexton he wasn’t starting, but, as you’d expect, the frontline Irish outhalf was again more than willing to take Carbery under his wing.

“Ah, look, he was brilliant,” said Schmidt. “He worked with Joey during the week. I think it really is a collaborative environment that we do have. It’s competitive for sure and Johnny wants to start all the time, just like the other 31 players we brought on tour.

“But they’re also conscious of being as collective as they can be and adding value to the guys who are starting and Johnny does a good job of that just like everyone else does. He’ll have his own frustrations about the first one but I don’t think any of them have a lot to do with Joey having started.”

“I think he handled the game quite well. He did everything that was asked of him. He attacked the line a good few times. He put Bundee away around the corner and he put Rob away a few times. It’s these situations that he’ll learn off and he grows from them, especially when he gets a chance like this. I think that’s the best way to do it and he performed well.”

For all Carbery’s inexperience, according to Stander he is also proficient at bossing those around him.

“In Chicago, when he came on to the pitch, there was no change. It was a change in personnel, but not in what we were doing and where we were going. From that day on, training-wise, every time he’s somebody who tells me where to go, what to do; he bosses the play. It’s something he’s probably learnt from players he’s played with, and something he has in his self.”

Another feature of Carbery’s performance was his willingness to take the ball into contact and make his tackles, bouncing up from one rib tickler by Michael Hooper.

“Same with that Fiji game last year, he took a big knock and broke his arm but he still got up and went on,” said Stander in admiration. “He’s a physical man in stature, he takes bigger knocks than me sometimes and gets up and I go ‘that’s impressive’. For him to do that and still perform at the end of it . . . he’s a good player.”

As an indication of Carbery’s temperament, tellingly when you ask Stander what he likes about him the most as a player, the answer is swift.

“Calm,” says Stander immediately. “He’s very calm. He’s calm, calm, calm . . . to the bone. I don’t know if his missus puts him under pressure sometimes, but I know nothing gets under his skin that I can see anyway. It would be nice to see in other parts of his life that people put him under pressure, but he’s never under pressure [on the pitch].”