Gerry Thornley: Even the personal is political, sport no exception 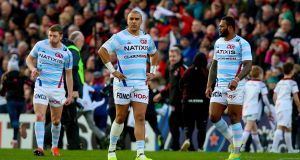 After the Heineken Champions Cup game against Racing 92 at the Kingspan Stadium, Belfast, Ulster’s Simon Zebo intimated he had been the victim of racist abuse. File photograph: Inpho

Sport should never be mixed with politics it has often been claimed. But there’s never been any avoiding it, both are inextricably linked.

As has been demonstrated recently, sport can also be a powerful and positive influence politically, whereas – as history has often shown us – not taking a stance usually just gives tacit approval to the unacceptable.

As the Leinster and Irish winger Adam Byrne recently noted, it’s sad that it took the filming of that brutal killing of George Floyd for this heightened sense of awareness to happen. But the increased diversity and globalisation of the Black Lives Matter campaign has forced seemingly every country, and many sports, to turn a mirror on itself. Rugby in general, and in this country, shouldn’t be an exception.

NFL quarterback Colin Kaepernick led the way bravely in American Football opposing racism, and the presence of Donald Trump in the White House, then other sports joined the struggle. Manchester City’s Raheem Sterling led the way in the premiership and now English football has used its post-pandemic return to unite powerfully behind the campaign.

Perhaps these sports are more multiracial than rugby generally and in Ireland. Although there are increasing numbers of participants from the Black, Asian, and the minority ethnic community in the game here.

Ulster joined in the denunciation, identified the individual concerned and banned him for life

It was encouraging to read recently Linda Djougang and Byrne speak so positively about their time in Leinster and Irish rugby, if not entirely so in the country. Known cases of racism in Irish rugby in recent years are also rare, thankfully, an exception being the day when Ulster hosted Racing 92 in the Heineken Champions Cup at the Kingspan Stadium.

Afterwards Simon Zebo intimated he had been the victim of racist abuse, a claim that his club backed and condemned. To their credit, Ulster joined in the denunciation and, with the help of Ulster supporters, identified the individual concerned and banned him for life.

Of late, Zebo has used his social media platform to illustrate his thoughts through powerful images. He also retweeted a link to an interview in the Cork-based Echo Live with the Young Offenders actor Demi Isaac Oviawe, from Mallow, in which she said, “I’ve been called the ‘n word’ thousands of times” and said even her four-year-old brother has been subjected to racial slurs.”

Of course this is a societal problem, one borne out of ignorance and lack of education. Coming from Cameroon at the age of nine, as Djougang noted, the history taught in Irish classrooms is exclusively that of white men and women.

Alas, rugby’s own history when it comes to racism is shameful. When The Irish Times ran its recent series on sporting controversies, for this writer rugby’s relationship with apartheid while the South African government was overseeing a regime that subjugated, imprisoned and murdered its black people remains the worst, by some distance.

It was surprising to learn of so many people who were unaware of even apartheid itself, much less South Africa’s regime and rugby’s tacit support. But it can’t be washed away. Countless tours were undertaken there by New Zealand, France and Ireland, among others, while also accepting tours by the Springboks.

There were many who opposed the tours, not least those in the Irish anti-apartheid movement. This was co-founded by, among others, Kader Asmal (who later served in Nelson Mandela’s government) and Gearóid Kilgallen, who subsequently wrote to say it was founded in 1964, not 1963, and that relief funds were sent by the International Defence and Aid Fund, run by Canon John Collins and his wife Diana from Amen House in London.

Another reader wrote in to say that there will be three new books around the controversial South African tour to the UK and Ireland in 1969/70 published this year, which cannot shine a positive light on the game.

As well as those who demonstrated in the streets, there were the Dunnes Stores workers who refused to handle South African products and then organised pickets outside their stores.

History will also reflect well on Donal Spring, Tony Ward, Moss Keane and Hugo MacNeill for being the only four players who boycotted the Irish tour of South Africa in 1981. No doubt some of those who did go now lament doing so and the IRFU publicly expressed its regret in 1989.

It always stuck in the craw that World Rugby, and the world of rugby, patted itself on the back for helping to provide that iconic image of Nelson Mandela handing the William Webb Ellis trophy to Francois Pienaar. Widespread and humble apologies would have been more apt. In truth, had rugby boycotted South Africa from the moment Mandela was imprisoned such a stance would almost certainly have helped to bring down apartheid sooner than was the case.

Rugby, along with cricket, were the sports that legitimised South Africa’s racist regime. As Spring put it: “The rugby tours gave them respectability and the boycotts hurt them more than anything else.”

Quite what the sport abroad and in Ireland can do is a moot point. They could simply emulate what English football has done. Moreover, like other sports extensive access is available to young minds, eyes and ears that could be used to further raise awareness of racism.

Rather than rap a player like Duncan Casey on the knuckles for tweeting about Palestine because it’s a violation of a player’s contract to become involved in political disputes, maybe the IRFU could underline that there will be lifetime bans for discrimination or racism in the rugby community. The union, which now regards itself as a non-political organisation, could also support Sari (Sport Against Racism Ireland) in calling on the Minister for Justice to implement hate crime legislation.

There’s lots that can be done and one thing is for sure, rugby’s history with South Africa’s apartheid regime gives lie to the notion that sport and politics don’t mix. It also leaves the sport with profound sins for which to atone, here included. gthornley@irishtimes.com