Match details, team news, how to watch, and the big talking points for Six Nations clash 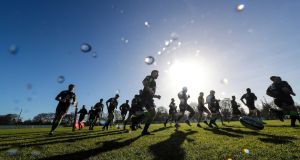 The Irish team during a training session at Carton House this week. Photograph: Billy Stickland/Inpho

Ireland’s eagerly-anticipated Six Nations third round encounter against Wales is at the Aviva Stadium on Saturday (kick-off 2.15pm).

Ireland have two wins from two, having beaten France in the opener in Paris - thanks to a last minute Johnny Sexton drop goal - before hammering Italy 56-19 a fortnight ago.

Wales on the other hand began with an impressive win over Scotland, before losing 12-6 to England. World Rugby has since admitted a mistake was made by the television match official in disallowing Gareth Anscombe a try in that encounter.

Our liveblog will be in full flow 30 minutes before kick-off on Saturday. If you’re in front of a TV, however, you can tune in to TV3 from 1pm or UTV from 1.30pm. Scotland’s clash with England follows at 4.45pm.

Andrew Porter has been named to start his first Six Nations match, while Munster’s Chris Farrell is also in Joe Schmidt’s XV for his tournament debut.

Tadhg Furlong failed to recover from his hamstring injury in time, leaving the door open for Porter who replaced him in the early stages of the win over Italy. The game has also come too soon for Iain Henderson, with James Ryan and Devin Toner starting in the second row.

Garry Ringrose returned to Ireland training on Tuesday but he has not been named among the replacements and is named in the Leinster team to face the Southern Kings at the RDS on Friday night, which should leave him in consideration for the Scottish and English games.

Dan Biggar has revealed the secret behind his earlier than expected return from a shoulder injury with the Welsh outhalf spending 10 days in an oxygen chamber, 90 minutes at a time. “It was pretty monotonous,” he said, “but I stacked my iPad and got through a series of Suits.

Biggar, Liam Williams and Leigh Halfpenny all return to the Welsh XV this weekend.

At 120kg/18 stone 12lbs, Porter is known to squat 350kg, and even fulfils a family tradition by going to the gym for some weightlifting on Christmas Day. He gets the nod at tighthead for Saturday’s fixture, but he was only converted to the position in the latter stages of last season, which makes his progress all the more remarkable.

Upgraded to a full contract this season after one year in the Leinster academy, he has made 14 appearances for Leinster as a tighthead this season, albeit only three from the start, and he has yet to start a European Champions Cup match there. Gerry Thornley gives the lowdown on him here in his team prediction.

With just six caps between Bundee Aki and Chris Farrell (and a Six Nations debut for the latter), Gordon D’Arcy senses that Wales will see a weakness in Ireland’s centre partnership. “Scott Williams and Hadleigh Parks will directly target Farrell’s defensive positioning. They will test him physically. They will heap the pressure on him and flood his outside channel.

“I used to love that sort of challenge.”

Who has the outright possession of the world record for a head coach in terms of Test matches played against Tier 1 countries? Warren Gatland, that’s who. The Wales coach will celebrate his 100th Test match as a head coach on Saturday. This will be Joe Schmidt’s 53rd, moving him into joint second place on the all-time Irish coaches list. John O’Sullivan has the full breakdown.

Gerry Thornley explains how traditionally, Ireland-Wales matches have been the most fiendishly unpredictable in this tournament, and playing at home has been more of a hindrance than a help. In the last 34 meetings in the Five or Six Nations, dating back to 1984, there have only been 11 home wins, with two draws and 21 away wins.

“Uneasily lay the mantle of favouritism in Paris, and so could be the case again this coming Saturday when Wales pitch up in the Aviva Stadium.”

Wales will attempt to shut down Johnny Sexton and Conor Murray, targeting the irish halfbacks’ kicking game at source. Warren Gatland has also highlighted CJ Stander as one of Ireland’s danger men. “We have got to be physical against them up-front and stop the running power of someone like CJ Stander, and stop allowing Murray and Sexton to dominate the game. If we can do that, we have got a chance.”

When Bundee Aki’s family will get up in the middle of the night back in Auckland to watch his latest appearance in a green jersey. Among them will be both his biggest fans and critics, who are even more exacting than Joe Schmidt. “I get a phone call every Monday after the games from the old man and mum, trying to tweak my game, just making sure that I’m doing everything right. Obviously the game last week, my handling skills weren’t great, so he gave me an earful on that and he was making sure I’ll do it right next time.”

He’s also received a few words of encouragement from his ex-Connacht coach Pat Lam. “He has little chats with me after the games and he is very proud of where I am, and he says, ‘Keep going, you’re in the place where you need to be, but you need to make sure you keep doing the hard work’.”