Ireland will look to make it three wins from three at the Aviva on Saturday (2.15pm)

Joe Schmidt's Ireland side hope to make it three wins out of three when they take on Wales in the Aviva stadium this Saturday. Video: Enda O'Dowd 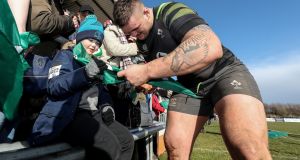 George North lingers on Warren Gatland’s bench while Jordan Larmour has been sent back to the Leinster reserves – with Dave Kearney at 15 against the Southern Kings on Friday night – as Fergus McFadden battles back into the Irish 23 jersey.

Schmidt stated that Henderson could “definitely play next weekend . . . he will be fine” and Furlong’s “progress just stalled a little bit.”

The hamstrung lock and tighthead means Andrew Porter and James Ryan – Under-20 World Cup finalists in 2016 along with Jacob Stockdale – come into a pack that, besides Dan Leavy (six caps), is otherwise stacked with experience.

“Andrew acquitted himself well against Italy,” said Schmidt, “but I know it is not the same level. Rob Evans is a tricky customer. The angles and stepping around – all that will be good learning experiences for Andrew. And they’ve all got to learn somewhere.”

Schmidt identified Henshaw’s replacement Chris Farrell as a “long-term project” before he joined Munster from Grenoble.

“I’ve been speaking to Chris for three or four years. He’s been a long-term project. I thought he did really well against Argentina in only his second test.

“But, yep, we are short on experience,” Schmidt added. “But if you want to be tested, what better environment than the white hot atmosphere at the Aviva.

“The unknown is always a fear for pretty much any human being and there is a little bit about the unknown going into this weekend.”

Cian Healy said he is more “excited” than worried about how Porter will go – he previously expressed delight that the 22-year-old switched to tighthead – while the 75 cap veteran described James Ryan as a “freak show.”

Jordi Murphy and Rory Scannell are the extra bodies, just in case, warming up with Saturday’s match day squad.