Ireland vice-captain Peter O'Mahony accepts the Coach of the Year award at the World Rugby Awards on behalf of Joe Schmidt, praising the New Zealander as a "super coach." Video: World Rugby 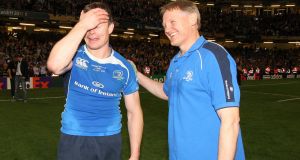 The Google search when Joe Schmidt first landed on these shores in 2010 was clogged by namesakes; a Hall of Fame NFL linebacker, a Ukrainian born tenor, among others.

There was no Wikipedia page. Only rumour about the 1991 sojourn in Mullingar and intrigue as Isa Nacewa branded him “Mr Rugby” when harking back to formative Auckland days. The cliff notes currently run to 2,230 words but that barely scratches the surface of a complex yet paradoxically simple soul.

“Joe’s got a good eye for people, he can read them quite quickly” says Neil McIlroy, exiled Scotsman, ASM Clermont Auvergne manager and self confessed Schmidt friend for life. “People always thought he was the good cop to Vern Cotter’s bad cop but that’s not the case - Joe could tell it straight as I’m sure you have had experience.”

Not really, not in the media, as Schmidt’s eight, going on nine, year policy has been to deflect attention, be it praise or criticism, with a self-depreciating bout of humour or, failing that, total silence.

There lies his expertise, as McIlroy explains, “With players he can be very direct or not, because Joe knows how to handle different people.

“He is genuinely a good person. It’s easy for me to say that.”

Initially at Leinster, he unlocked a potential in Irish rugby nobody knew existed, with the promise of rising towards Yokohama and the World Cup final on November 2nd 2019. Thereafter, he has categorically stated, rugby will suddenly cease to be his overwhelming obsession.

“Joe is not somebody who is driven by money,” McIlroy stated. “He is a winner, obviously, but personal ambition is what drives many coaches I’ve encountered, that’s never been at the heart of Joe Schmidt.

“People might underestimate the strain of the job, especially coaching Ireland, it must be so tiring. I think he is sincere when he says he wants to kick back a bit and spend some time with his family.”

Only time will tell but the 53-year-old walks towards 11 months of pure stress and strain as Ireland seek possession of the William Webb Ellis trophy.

“His strength as a head coach is not to claim to know everything but he’ll either find out as much as he can or surround himself with people who do know.”

Examples are many, but take Bundee Aki and CJ Stander.

A bruising joker in the Connacht pack who came late to the elite tier of New Zealand rugby before suddenly moving to Galway, Schmidt held a meeting with Aki the summer before he became Irish qualified to perhaps frame a future that put his fellow Kiwi at the centre of Ireland’s Grand Slam and All Blacks rupturing fortunes.

Or see Stander, the underage South African leader, who felt rejected when the Springbok system tried to transform his six foot one inch frame into a hooker. Schmidt provided a platform for these irresistibly durable Irish residents to become internationally renowned players.

His finger prints have been dusted off a multitude of victorious crime scenes.

“During the [Women’s] World Cup preparation in 2014 he was so kind, gave up his time, flew me back from Marcoussis to join the international camp in Carton House to go through our attacking structure,” said Greg McWilliams, the current USA backs coach.

That victory over the world champion Black Ferns proved an extremely productive day for Irish rugby. On two counts. As Fiona Coghlan’s team achieved the seemingly impossible, IRFU high performance director David Nucifora and Schmidt sat either side of Johnny Sexton in the main stand 30km outside Paris. A few days later Sexton announced his return home from Racing Metro 92.

“On the pitch I couldn’t understand what they were doing,” wrote Paul O’Connell as Munster consistently failed to live with Schmidt’s Leinster (2010-13).

“All I knew was we couldn’t get near their ball at the ruck and we could barely secure our own.”

The “microscope” is how he repeatedly describes each surgical inspection of games with many of the greatest Ireland achievements hatched in Schmidt’s bunker outside Maynooth.

“The biggest thing I’ve picked up from Joe is the detail,” said Leinster wing Adam Byrne. “You might not touch the ball during [an attacking move] but I can do animation plays and run support lines to open up space for someone else.”

McIlroy simplifies him down to the nomadic forty-something, with five strong family en tow, that he first encountered in 2007.

“Joe is a fantastic technical coach but in our game what makes the difference is the person. Quite early on I realised he was also an exceptional individual. It’s about how he handles people - that’s the great strength of Joe Schmidt, he’s an outstanding person. It would pain him to hear me say that but that’s Joe.”