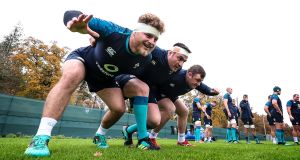 Finlay Bealham, Niall Scannell and Dave Kilcoyne during Ireland training ahead of the Guinness Series clash with the USA. Photo: Billy Stickland/Inpho

This week Niall Scannell’s head is in the USA, his soul is in Munster and his heart beats with Ireland. That’s just the natural lie of the land for the Cork hooker.

But not a day goes by that Johnny Sexton’s in vogue and ever monitored body, is drawn from the pitch and strung out with Christmas lights.

Last week Peter O’Mahony lit up the park but with Sexton making passage through the game uninjured and a tanned Conor Murray cheering from up in the gods, the World Cup and destiny momentarily hung in the air.

“The sooner we get Conor back on the pitch for Munster and Irish rugby the better,” says Scannell. “Hopefully soon, because we’d sure love to have him back.”

Amen. He is, we’re assured, training again. As a hooker, Murray and Sexton can determine how the game shapes up for Scannell.

Sexton kicking for territory can force an aerobic session of running and Murray popping the ball for the low numbers to bullock forward into chains of collisions shapes a workload. A different animal is hooker Seán Cronin, perversely looking to burn a centre or fullback.

In that light Scannell has had his shoulder tapped post game, not with the Irish captain Rory Best in his ear but the Irish outhalf ready to deliver urgent advice.

“He’s a massive standard setter in training and he’s one of our big leaders,” says Scannell of Sexton. “Particularly from an attack point of view he’s hugely competitive, he brings those standards.

“I haven’t been with him those last couple of weeks but just looking back to my experience in Australia, it’s probably more the little things he taps you on the shoulder about post-game .

“I was obviously catapulted in (to the Australian Tour) a bit late when Rory (Best) got injured and he just helped me. It’s not like he’s on your case but when he can pull up a clip and say ‘in the this scenario if you did A B or C then it just gives you a better overall understanding.”

Oddly for a team, if it’s not the twin peaks of excellence of outhalf and scrumhalf consuming the oxygen, it is replacement Joey Carbery, who along with Scannell and others will get long form opportunity against the USA on Saturday.

“I’ve probably noticed how mature he’s been since he came to Munster. That wasn’t an easy transition for him,” he says of Carbery.

“Everyone knows that [it’s hard] to come to another province but he’s been exceptional since he came down. He’s one of our team leaders in Munster, which is scary when you realise he’s only 23.”

Scannell like Carbery and the rest of the group that face the American team have common purpose. It is to whitewash the series and set up a chance for Ireland to become the number one side in the world after the first round of the Six Nations.

It is also be to be part of the Six Nations or at least sew doubt in the mind of Schmidt on the makeup of his starting team and bench. To that end familiar players like Tadhg Beirne will be important. New combinations, old faces.

“Rory (Best) had an unbelievable game and Seanie (Cronin) came on and had a massive impact as well,” he says. “So there’s just a bit of an acceptance factor.”

That’s not a white flag from Scannell but an acknowledgement of the challenge of the mountain ahead.

It’s understanding the extent of the demand, knowing what his heart might think, but also where his head will be.