Conor Murray and Robbie Henshaw out of All Blacks clash 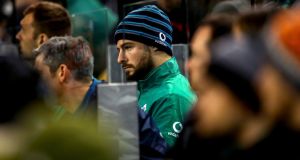 The IRFU have confirmed Conor Murray will not play any part in Ireland’s November internationals, ending any speculation the scrumhalf could make a return to action against the All Blacks.

Murray has not played this season due to a neck injury, which will keep him out of Saturday’s showdown against the world champions at the Aviva Stadium.

Murray had trained with the Ireland squad at Carton House the week before last and with Munster last week, with Joe Schmidt refusing to rule him out after the 28-17 win over Argentina.

“It’s not the injury, it’s really just how ready Conor is,” he said. “How fully fit he is because the injury itself has gone really well, but it is tough to come back into a game of that magnitude though. It is highly unlikely he will be involved, but as I said, I will talk to him.”

However any hopes the Lions nine would be named in Saturday’s XV - as predicted by All Blacks coach Steve Hansen - were dashed on Monday morning, and Murray now won’t be joining his international teammates.

Ireland will also be without Robbie Henshaw, who missed the win over Argentina after injuring his hamstring in the warm-up.

Henshaw, who was replaced by Will Addison against Los Pumas, will play no further part in the autumn series - meaning Bundee Aki and Garry Ringrose are likely to start in midfield against New Zealand.

25-year-old Henshaw has had mixed fortunes against the All Blacks, scoring the key try in Ireland’s famous win in Chicago in 2016, before being stretchered off with a head injury in Dublin weeks later.

Lions to play Japan on home soil before tour to South Africa 09:26
Tiger Woods in the groove as he plots a path to Augusta 09:22
No underage or minor GAA to be allowed under Level 5 Covid-19 restrictions 08:53
Ole Gunnar Solskjaer hails players after win over PSG 07:57
Rashford gives Man United another win in Paris; Gordon D’Arcy on Finn Russell 07:34
Crossword Get access to over 6,000 interactive crosswords