Three changes for Scotland as they look to stop France 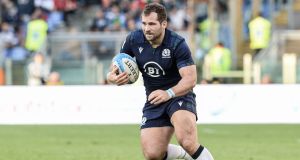 Fraser Brown will win his 50th cap for Scvotland in their Six Nations match against. (Photo by Silvia Lore/Getty Images)

Kick-off: 3pm, Sunday. Venue: Murrayfield. How to follow: The Irish Times liveblog will begin at 2.30pm. On TV: Live on Virgin Media and BBC One.

Scotland coach Gregor Townsend has made three changes to the forward pack for Sunday’s Six Nations clash at Murrayfield against leaders France, with hooker Fraser Brown, lock Grant Gilchrist and number eight Nick Haining coming into the side.

Brown is set to claim his 50th test cap, the 43rd Scotland player to do so.

Exeter Chiefs lock Sam Skinner has been named as a replacement after recovering form injury while Glasgow Warriors’ Kyle Steyn could make his Scotland debut from the bench.

“This week we face a France team that looks galvanised since the World Cup, with a potential Grand Slam in their sights following impressive wins over England, Italy and Wales,” Townsend said.

“France’s victories have been built on an aggressive and well-organised defence, so the precision, decision-making and effort in our attacking game will have to be very good in order to get in behind them this weekend.”

Scotland are fifth in the standings.