Teddy Thomas left out of France squad to face Scotland 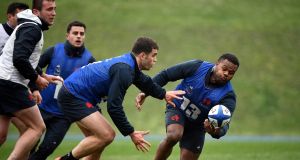 France winger Damian Penaud battles with Virimi Vakatawa during a training session ahead of their Six Nations meeting with Scotland. Photo: Franck Fife/AFP via Getty Images

Kick-off: 3pm, Sunday. Venue: Murrayfield. How to follow: The Irish Times liveblog will begin at 2.30pm. On TV: Live on Virgin Media and BBC One.

France coach Fabien Galthie made two changes to his team to face Scotland in the Six Nations on Sunday as winger Teddy Thomas was left out of the squad.

Thomas showed worrying defensive shortcomings in the first three games and was not included among the replacements to face Scotland. Damian Penaud made his return from injury after missing the victories against England, Italy and Wales.

Prop Jefferson Poirot will start in the absence of Cyril Baille, who sustained a shoulder injury in the 27-23 win in Cardiff in the previous round.

Grand Slam hopefuls France top the rankings with 13 points, four ahead of England, whose trip to Italy was postponed because of the coronavirus outbreak.