Jacob Stockdale stays grounded after the highs of 2018

Winger not expecting to equal last year’s try tally, but could seize the day at Six Nations 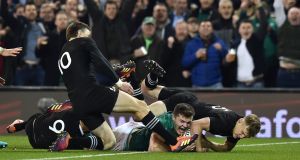 Jacob Stockdale scores a try against New Zealand at the Aviva Stadium in Dublin in November. Photograph: Charles McQuillan/Getty Images

How to follow that? Jacob Stockdale cannot, in all likelihood, emulate his achievements of last year’s rookie Championship campaign when scoring seven tries. He knows it as well as anyone.

Grounded as ever, that he never allowed last season’s stunning achievements to inflate his ego is not surprising. It reflects well on his parents, Graham and Janine, and can also perhaps be attributed to Stockdale being a late-developing, atypical rugby player.

His father, a Presbyterian minister, currently works as a chaplain in the prison service in Maghaberry, while his mum works as a doctor in midwifery, but Stockdale admits that at first it was difficult to keep his feet on the ground.

“It was more of a challenge than I expected it to be. All of a sudden, people are taking photos of you in the street and there are paparazzi outside the hotel, which was very strange to me. I wasn’t a massive fan of it, to be honest.”

“But it’s pretty easy to easy to keep your feet on the ground because professional sport moves on so quickly. If you get too caught up in what you’ve done, you can be left behind. Exactly a week after we won the Grand Slam I was playing away in Cardiff for Ulster – and we lost. It’s a pretty good way of getting your feet back on the ground. So I don’t find it too difficult.

“My parents probably did a pretty good job of that. To be honest I feel I was pretty aware of the fact that I could fall in love with myself so I just tried to make sure that whenever I got back in the Ulster set-up I was working hard, making sure I was always playing my best for them.

“But you always get a few of the older lads taking the piss out of you a wee bit,” he adds with a broad smile. “They try to cut you down. Besty has done plenty of that, so he has.”

It’s worth noting that Stockdale has shown few signs of his cutting edge being blunted, upping his strike rate to seven tries in eight games for Ulster this season, when scoring in every round of the Heineken Champions Cup.

That is my main focus, making sure I do everything during the week to allow me to perform well at the weekend

Yet, on the eve of the 2019 Six Nations, the 2018 record-breaker cheerily admits: “I am not expecting to score eight tries this year. For me, it is just about train the best that I can so that I can play the best I can. Whenever you are performing well the tries come off the back of that.”

“That is my main focus, making sure I do everything during the week to allow me to perform well at the weekend. Then, England at home in the Six Nations is not a hard game to get up for, or get excited about. That’s my process.”

Stockdale retains an astonishing habit of seizing the moment, akin to a striker who seems out of the game for stretches but then comes alive when the goal comes into view.

Indeed, after four tryless tests in a row, it was Stockdale who completed the match-winning try against New Zealand in November with that perfectly weighted “end-over-end” chip on the run and gather.

It’s a skill that is the product of countless hours of practice. “And it’s not just to score tries, it’s to exert pressure on them,” he adds. “If you kick it in behind and the full-back does counter and you can get a tackle in then all of a sudden a team is trying to kick out from five metres off their line, and that’s the kind of pressure that you want to apply as a winger.

“You practice that in here massively. Richie Murphy and Joe [Schmidt] are huge on that, and after the kick following it up with a good tackle and not letting them out of there is something that all wingers would practice.”

Invariably, Stockdale was obliged to laugh off England defence coach John Mitchell’s perceived slur, when he said Ireland will try to “bore the shit out of us”.

“I wouldn’t say it is boring. To be honest, I’m incredibly excited about getting stuck into the Six Nations again,” he said, before interpreting the “boring” tag as a compliment.

“Joe talks about being excellent in every small thing that you do. That doesn’t happen by accident. We train really well and we try to keep that accuracy in training, so that when it comes into the game, we hold onto the ball. Eventually, if you hold onto the ball, teams are going to make mistakes in defence. That’s where the opportunities come from.”

“That is part of the game plan, to be really accurate in everything we do and build pressure off the back of it.”

1 Gerry Thornley: Munster will make for interesting case study when rugby resumes
2 Game Changers: Gary O’Toole took a stand when others turned their heads
3 Racing regulator happy with screening protocols despite high-profile breaches
4 Georgia and Fiji in line to join Six Nations sides in eight-team tournament
5 James McClean says he gets no support for abuse he receives
Real news has value SUBSCRIBE

Mako Vunipola to remain at Saracens despite relegation from Premiership 17:45
It’s not the Ryder Cup without fans - Tiger Woods backs postponement 17:29
Laytown beach races cancel September meeting due to coronavirus 16:24
Racing regulator happy with screening protocols despite high-profile breaches 15:50
McNamara hopeful that Ireland under-20s will get to compete for Grand Slam 15:32
Crossword Get access to over 6,000 interactive crosswords