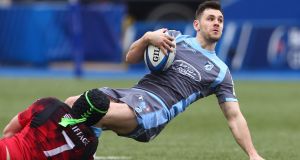 Tomos Williams will make his Six Nations debut for Wales in Friday’s tournament opener against France.

The Cardiff Blues scrumhalf, who featured in six Tests last year, has been preferred to Gareth Davies for the game in Paris.

Head coach Warren Gatland has announced two other changes from the side who beat South Africa in November, with Scarlets prop Rob Evans and Blues flanker Josh Navidi both gaining call-ups.

Evans takes over from Nicky Smith, who has been battling to recover fitness, and Navidi returns after missing this season’s entire autumn series because of injury.

Davies, meanwhile, has shaken off a thigh strain, but he will be among the replacements as Wales target a seventh win from their last eight starts against Les Bleus.

Williams, 24, is partnered at halfback by his Blues colleague Gareth Anscombe, with Dan Biggar joining Davies on the bench.

Number eight Ross Moriarty makes a first appearance since mid-December after being sidelined because of concussion, packing down in the back-row alongside Navidi and openside flanker Justin Tipuric.

Leigh Halfpenny misses out as he continues his recovery from concussion, with Liam Williams retaining full-back duties and George North and Josh Adams being selected on the wings.

Victory for Wales at Stade de France would extend their unbeaten run to 10 games, matching a longest winning sequence since 1999. Their last defeat was against Ireland in last season’s Six Nations.

Gatland said: “We are looking forward to kicking off the Six Nations and kicking off our 2019 campaign as a whole.

“We come into the game on an impressive run of results, but we know how tough it will be to face France in Paris in the tournament opener.

“It will be a huge contest, but we are excited going into it.

“We have a great deal of experience across the team and on the bench, and we want to kick things off well on Friday.”