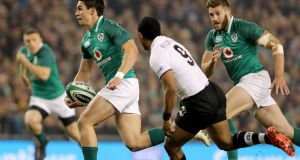 On Friday I mulled over the best method of benchmarking the 13 “new” players facing Fiji. The breakdown is an enormous fulcrum for Joe Schmidt’s sides, and in detailing Rob Kearney’s phenomenal approach to same it was an area to get right. On Saturday it was far from acceptable, and many players will struggle in a team review. More anon.

But on reflection I feel an even better benchmark is the oft simply-put concept of creating space and exploiting space. Peripheral vision is the key here.

Nemani Nadolo has his way, but few of us have his weighty assets and must open doors within the team’s structures. Schmidt’s relentless systems get opposition defences in terrible positions, which certain players with unique abilities and vision can exploit. Joey Carbery is one of these special players.

Ultimately Darren Sweetnam exploited Carbery’s break on 6:42 minutes, but to have a player like Carbery with the ability to spot two Fijian forwards out of shape and exploit in one moment, whilst remaining aware of his assets in better positions to exploit in the next moment, is too valuable not to find a place somewhere in the team.

Very few of Saturday’s team could make the break, have the peripheral vision to spot Sweetnam, and then hit him with the sweetest of passes. Many would not see him, and at best offload or die with the ball.

Andrew Porter had a powerful day in the set piece where the Irish scrum was teak tough, such as at 22:44 minutes leading to Dave Kearney’s try.

Tadgh Furlong, when he replaced Porter, also had that peripheral vision, adding ball-carrying, dainty feet and top class tip-on passes for others to benefit from. But then he’s a Lion and Porter et al are quality but without multiple cap experience. Porter’s first big carry was on 31:40 minutes, and in leading with the ball he momentarily compromised control.

I would love to see their ambition go beyond the structured set piece and evolve into what Furlong does in his ease.

Andrew Conway is another player who can create and exploit space through his incredible peripheral vision. This column has been a long-time admirer of Conway, and I really enjoyed the variety of his play on Saturday as he explored his options.

From his first fielded ball on 12:22 minutes, he decided to run back, but, as is his natural instinct, he hunted for green grass. Yet soon he was up and running, and that running is a joy to watch – carrying in both hands and rarely doing the same thing twice, he places doubt in defenders.

He often received running an in/out line or out/in. Then as defenders bite on him, he simple pops to a “free’ runner, as he did to Sweetnam on 43:08 minutes. The initial catch was by Sweetnam, and clearly they are both on the same wavelength, where all was done in the tightest of tram tracks.

Do watch Conway open a door for Sweetnam to exploit, which did not happen against South Africa.

Where Carbery is regarding “control” is almost impossible to know as he does not play at 10 regularly, so it is unfair to benchmark his control to, say, Ronan O’Gara or Johnny Sexton. I wondered as the match unfolded what communication he received from his centres. Clearly I’ll never actually know, but there were occasions where Carbery’s natural instinct and lack of outhalf time may have been tempered by Stuart McCloskey outside him in the 12 jersey.

On 10:20 minutes the score was 5-0, and Fiji exited brilliantly from their 22; over and back, full width with countless white jerseys lining up, most of whom could do damage. When the breakout finally died I wonder did any Irish player sidle up to Carberry and whisper “control, regain control”. Methods of doing so vary, but Fiji needed to be killed off before they got started and starved of oxygen.

What did we learn from Fiji?

There are players like Porter with huge potential; others with the ability to create and exploit space like Furlong, Cian Healy, Ultan Dillane, Carbery and Conway; and others who can exploit the space created by others such as Sweetnam. Yet, unfortunately, there are others who may not get that glorious opportunity too often.

As for Fiji, their counter-rucking was immense, and their ability to utilise the entire width of the pitch was even better. Yet as most are based in France their top-end fitness was suspect and they’ll forever give weight to the idea that risk is never worth the reward, such as the gift Jack Conan converted for his try.

This last point is a terrible realisation: reward I hope is always worth the risk or else they’ll be no need for Carbery and Conway!

When Schmidt is prowling there is always pressure on each Irish player to “perform”. All but the rock Rhys Ruddock were vulnerable to Fiji’s counter-rucking, where Ireland turned over unacceptable amounts of ball.

There were several examples where Ireland struggled to control the controllables, such as Fiji’s restart on 66:33 minutes where Dillane’s pod went up but no one anticipated the fly over, as had Devin Toner in Fiji’s initial kickoff.

There’s way too much in the breakdown, including Jordi Murphy’s quality steals, to examine today, so be patient! In the meantime Ireland won a game with a whole raft of new faces – with some especially shining.

PS: How wonderful was it to see the gigantic Fijian players treat an tUachtarán with such gentle respect as all shook his hand with both monster hands. What a beautiful people.