The more Joe Schmidt’s side spill the ball, the more they invite Fiji to counter off turnovers 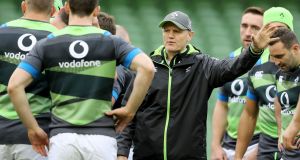 Ireland need to have solid set-pieces and keep the ball for extended phases so as to suffocate the Fijians. Photograph: Dan Sheridan/Inpho

This is a big opportunity for sure but against that it also looks like the proverbial banana skin. And to prevent Fiji spoiling the party it’s Ireland who will have to play like party poopers, or at any rate killjoys.

The tea-time, sell-out crowd will invariably warm to Fiji’s enterprising brand of offloading, side-stepping and offloading rugby, albeit with a degree of bone-crunching straight charges too. As they demonstrated with the island’s first Olympic gold medal, the looser it gets and the more it resembles Sevens, the better they like it.

Therefore, the more Ireland don’t allow it to become like that, the better for them. Ireland can play with enterprise but to begin with anyway, and as long as the match is in the balance, they need to have solid set-pieces and keep the ball for extended phases so as to suffocate the Fijians. The more Ireland spill the ball and the looser they kick, the more they invite Fiji to counter off turnovers.

Ireland have had it pretty comfy in the three home meetings in Dublin where the IRFU deigned to award caps, as well as the other meeting in Limerick when the Fijians alone awarded their players caps.

But there was also a clash in October 1985 when Ireland played a dozen of their Five Nations and Triple Crown-winning side, and after completely losing their way as the Lansdowne Road crowd warmed to the Fijians’ party rugby, were indebted to a late Michael Kiernan penalty.

Furthermore, this Fijian scrum is stronger than might be expected, and as Munster can testify, Leone Nakarawa is a wonderful line-out operator on the opposition throw as well as being a marauding and quick ball-carrier, not to mention the offloading skills which have seen him labelled Octopussy in French rugby.

The presence of Devin Toner is therefore comforting, as is a hard-carrying, hard-working backrow and a beefy if rare midfield duo of Stuart McCloskey and Chris Farrell will presumably be employed to earn Ireland go-forward balls.

But with Joey Carbery and Ben Volavola firmly in the club of running outhalves, this cannot remain too structured for too long, and Joe Schmidt maintained: “I’m hoping for variety, that they can link up and play with width, but also be direct when we need to be, and play with a lot of energy defensively. They [Fiji] are well able to dominate the gainline.”

Ireland look less than tempting at -25 on the handicap, considering Fiji had a four-game winning run over Italy, Scotland, Tonga and Samoa before losing 19-10 to Italy in Ian McKinley’s debut last week in Catania.

The return of Montpellier prolific human wrecking ball Nemani Nadolo is further evidence that this will be no walk in the park, and when Fiji spring Niko Matawalu from the bench, he knows only one speed at which to play the game – 100mph.

“[Niko] Matawalu recently certainly opened up one of our teams, Nakawara is well known to us as well. Guys like [Levani] Botia, played six against Ulster for La Rochelle, and I think he’s in the midfield. He’s this powerhouse who I think people will be excited to see. Obviously people recently saw Nadolo up close and personal, Joey saw that. I think it was something like 11 tackles he broke the last time he played an Irish team. I’m sure he’s looking to break a few more.”

But while this will be a searching Test defensively for Darren Sweetnam particularly, and for Dave Kearney in encountering the other Montpellier winger Timoci Nagusa, there will be opportunities going forward as neither Fijian winger is the strongest defender, or in the air.

“When they have the ball you have to be energised to go after them and not be afraid of them because if you let them dictate terms they’re capable of taking anyone on and beating defenders at will,” said Rhys Ruddock yesterday. “So just try and give them less time and space and be accurate with what we’re doing so don’t gift them opportunities to play the way they want to play with lots of time and space.”

Having led Ireland to three wins on their summer tour, on a day of so many firsts, Ruddock captains Ireland at the Aviva Stadium for the first time and while there are plenty of unknowns, along with untried combinations, there should also be plenty of positive energy about, on both sides.

“I think with the nature of this group, with guys getting first caps, first starts, a lot of young players, a lot of guys who haven’t played in a while, there’s always going to be that excitement,” agreed Ruddock.

“And any opportunity you get at home, in a green jersey especially – myself, I don’t even have that many games here in the Aviva – it is special. The fact that it is sold out as well will give the lads a massive boost. It’s always a special occasion when it’s a full stadium.”

This could be fun. It could be anything. It should certainly be revealing.