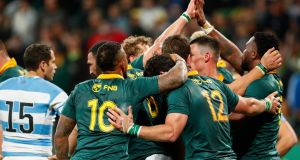 The Springboks dominated the physical contest and scored tries through winger Courtnall Skosan, flanker Siya Kolisi and lock Pieter-Steph du Toit, their fourth victory in a row after a 3-0 clean-sweep of France.

The Springboks also handed a first cap to 20-year-old outhalf Curwin Bosch when he replaced Elton Jantjies late in the game.

“We couldn?t have asked for a better start (to the competition),” Bok captain Eben Etzebeth said after the game.

“We said at half-time we must keep going and the ball will break for us.”

After a miserable 2016 in which they lost eight of their 12 tests, signs of a Bok revival continued as they won key battles against Argentina.

The home side were dominant in the scrum and held their defensive shape well, offering little space for the visitors to exploit.

The Boks dominated possession in the opening half, but after Jantjies had kicked two penalties, it was the visitors who scored the opening try against the run of play. They completed a swift break in the corner after Jan Serfontein’s attempted grubber kick was scooped up and Landajo was sent clear to dot down.

But a moment of magic by Skosan just before half-time, coupled with some weak Argentine defence, allowed the wing to score his maiden international try as the Boks headed into the break with a 13-5 advantage.

The teams traded penalties early in the second period, before the Boks took control of the game when Rhule rounded off some slick handling to cross for his try.

At that stage the Boks led by 15 points, but that was cut to seven when Boffelli crossed in the corner for the visitors after some concerted pressure in the home 22.

With 20 minutes to go the game was still in the balance, though the Boks continued to dominate possession and territory, and they made sure of the win as Kolisi and Du Toit crossed for tries against the wilting Argentine defence.

“South Africa had a great game,” said Landajo. “We need to improve at the breakdown, the ball was very slow. Next week in Salta we will try to use our home crowd to our advantage.”