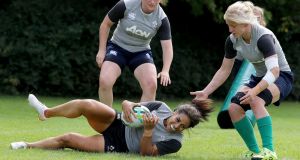 Ireland women’s coach Tom Tierney has made seven changes to his starting XV for Sunday’s clash with Japan at the UCD Bowl (kick off 5.15).

After that testing start Tierney has brought in a number of fresh faces - and he has handed a debut to scrumhalf Nicole Cronin, who partners Nora Stapleton in the halfbacks.

Elsewhere skipper Claire Molloy - who delievered a mammoth performance in the opening win - shifts to number eight, with Ciara Griffin coming into the backrow.

Ciara Cooney and Sophie Spence come in to form a new secondrow, while in the backline Katie Fitzhenry comes in at outside centre with Sene Naoupu moving inside to 12.

Ahead of Ireland’s crunch second game, Tierney said: “We had a really tough encounter with Australia on Wednesday evening in the opening game, and while we came away with the win, there a number of areas that we’ve focused on over the past two days that we will need to improve on for tomorrow’s test with Japan.

“We know that the Japanese are going to throw everything at us tomorrow evening. They’re very fit, they like to move the ball wide and they are very quick to the break down.

“We’ve made a number of changes to the side from the Australia game with a view to giving some players a rest from what was a very physical game, but we also want to give the other members of the squad the opportunity to show what they can do against a fast and agile Japanese team”.