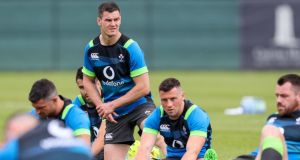 Johnny Sexton during Ireland training ahead of the tour to Australia. Photo: Billy Stickland/Inpho

It has been suggested by Ireland coach Joe Schmidt that Leinster outhalf Johnny Sexton and Munster flanker Peter O’Mahony share the captaincy of the Irish team on their three-Test tour of Australia, which begins on June 9th.

“A number of these things have just become apparent,” said Irish coach Joe Schmidt at the Irish team training base.

“We’ve two vice captains in Peter O’Mahony and Johnny Sexton and a strong leadership group. It will depend a bit on selection and what we feel we need at any given time. It could be that Pete and Johnny take the team on and share the load.”

Given Schmidt has taken three outhalves, Sexton, Ross Byrne and Joey Carbery, it is likely Sexton will sit out some of the game time.

Schmidt is missing his regular captain, Rory Best, who has been ruled out of the matches in Brisbane, Melbourne and Sydney because of a hamstring injury. Munster hooker Niall Scannell has been called up as replacement.

Best sustained the injury when he was training with Ulster and was forced to watch his club’s final play-off game of the season, which was critical to secure a place in next season’s European Champions Cup. Ulster won the match against Ospreys 35-17.

Schmidt had hoped Best would have progressed enough to at least travel and play some part in the tour.

“He had a hamstring issue that kept him out of the game against Ospreys and we felt he was really going in the right direction and he would be ready for game one [against Australia], definitely for game two,” said the Irish coach. “But he’s just not quite where we need him to be.”

The 35-year-old has proven one of the most durable players in the Irish squad and started all five matches of Ireland’s Grand Slam-winning Six Nations campaign.