Six Nations may come back on expanded home-and-away basis 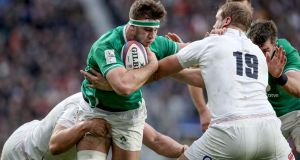 The Six Nations could be played as a home-and-away tournament next season if the coronavirus pandemic prevents the autumn internationals going ahead as planned.

RFU chief executive Bill Sweeney remains optimistic it will still be possible for England to play planned tests against New Zealand, Tonga, Australia and Argentina in November, but said several contingency plans were under discussion, including an expansion of the Six Nations to fill the void.

“The preference from both the north and the south is that the original programme will go ahead,” Sweeney said. “But of course that’s driven a lot by international travel restrictions so both [the north and south] are developing back-up contingency plans.

“There are two or three different options we could go ahead with that feature more northern hemisphere competition around that autumn window.

“One of them is you’d play a Six Nations tournament in that autumn that would combine with fixtures next year and for the first time ever you’d have home and away. It’s possible. Every [plan] has pros and cons to it and those are being evaluated.”

Plans are already in place for the remaining fixtures of the 2020 Six Nations, suspended amid the pandemic, to be played later this year.

Sweeney said it was too soon to say with any certainty whether international rugby would return behind closed doors, with the RFU looking at several possibilities, including looking at how Twickenham could host games with social distancing in place.

“You would be surprised the impact [a 2m social-distancing] rule has in an 82,000-seater stadium but 1m has a very different impact,” he said. “We’ve run every model so we’ve got a sense of what that does.”

The RFU on Tuesday announced plans for the game to return at the community level as lockdown restrictions continue to ease, though the situation remains too uncertain for a firm timetable to be put in place.

Sweeney called the community game the RFU’s “lifeblood” but said the organisation could come out of the crisis strongly.

The RFU had been looking to pay off remaining debts following the redevelopment of Twickenham’s East Stand by 2022 but that will be now be delayed.

“This is not a 12-month bump in the road,” Sweeney said. “This is much longer-term fix. The consequences and impact will be with us for some time.

“We were investing in and will continue to invest in our high-performance pathways ... We’ve got an outstanding crop of players and a World Cup coming up in 2023. We’ve got a great head coach and we want to make sure we don’t go backwards in any way.

It was announced last month that Tyrrells will end its sponsorship of the Premier 15s in August, but despite the economic downturn caused by the pandemic, Sweeney said potential partners had already expressed interest in backing the women’s top flight.

“Some companies are in better shape than others and some see a very good opportunity to enter a market that’s maybe a bit distressed,” he said. “That’s why we wanted to get the announcement out there.

“We have got a couple of very serious, significant players who want to get involved in women’s sport and possibly in women’s rugby, so we’re optimistic we can make something happen.”

1 Serpentine stays on from the front to steal Epsom Derby for Aidan O’Brien
2 Eamon O’Shea: We spent quite a bit of time talking about older people rather than to them
3 Love tears them apart in stunning Epsom Oaks romp
4 Glorious Greenwood as Man United thrash Bournemouth
5 Monica Seles: The warrior queen who could have been the best ever
Real news has value SUBSCRIBE

Arsenal check Wolves to relight their European fire 19:41
Leeds move four clear as Brentford add to Wigan woes 18:07
Jamie Vardy reaches his century to get Leicester back on track 17:38
Glorious Greenwood as Man United thrash Bournemouth 17:28
Serpentine stays on from the front to steal Epsom Derby for Aidan O’Brien 17:24
Crossword Get access to over 6,000 interactive crosswords