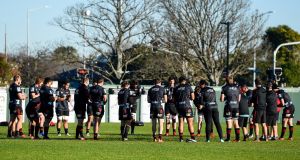 Replacements for sent-off players and golden point extra time will be among the innovations on display when New Zealand’s domestic professional rugby competition kicks off next week.

The country’s governing body has announced a series of changes for the Aotearoa Super Rugby competition, which involves New Zealand’s five Super Rugby teams and begins on June 13th.

Chief among the new moves will be the ability for teams to replace red-carded players 20 minutes after they are sent off with another player.

“While players should, and still will be, punished for foul play, red cards can sometimes have too much of an effect on a match,” New Zealand Rugby’s (NZR) head of professional rugby Chris Lendrum said in a statement.

“There are no winners when a player is red carded, but paying rugby fans, players and coaches want to see a fair contest. Replacing a player after 20 minutes strikes the right balance.”

When scores are level after 80 minutes, an extra 10 minutes will be played, and the first team to score — by drop goal, penalty kick or try — will be the winner.

The winning team will earn four points and the loser will gain one point, while both teams will receive two points if there is no score in extra time.

Sides can still earn one bonus point by scoring three or more tries more than the opposition, including in extra time.

“Draws can often leave everyone feeling a little empty and after feedback from our coaches and players we have added the golden point rule,” Lendrum said.

“We’ve seen the excitement it can generate in other codes and we think it adds a real edge.”

NZR also announced a crackdown on rules at the breakdown — in areas including secondary movements for ball carriers and the roll-away of tacklers — to create a faster and fairer contest.

1 Game Changers: Gary O’Toole took a stand when others turned their heads
2 Gerry Thornley: Munster will make for interesting case study when rugby resumes
3 Roger Wilson tackling the problem of bad technique in Texas high school football
4 James McClean says he gets no support for abuse he receives
5 Georgia and Fiji in line to join Six Nations sides in eight-team tournament
Real news has value SUBSCRIBE