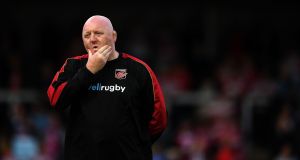 Bernard Jackman has been helping coaches from around the world share their coaching experiences while there is no action. Photograph: Harry Trump/Getty Images

“The Secret to the Japanese Attack Speed” by Atsushi Tanabe captivated the most recent Zoom gathering of coaches. It was effectively a presentation that explained the collapse of Joe Schmidt’s Ireland on that dark night in Shizuoka.

“Atsushi was the Japanese skills coach at the World Cup,” said Bernard Jackman. “His presentation was phenomenal – he has great English – blew us all away with an hour on Jamie Joseph’s strategy for their home World Cup.

“Around 70 per cent of it was around how Tony Brown sets his attack up but the other 30 per cent was on the overall strategy; the alignment between the Japanese rugby union, how they used the Sunwolves as a development team, and created a six-month period of preparation going into the tournament.”

This began like any WhatsApp group created since March. Seven housebound souls, with a shared passion, searching for lost stimulation.

Jackman wasn’t organising quiz nights or dusting off a Texas hold’em sleeper cell; he has been facilitating the exchange of ideas among rugby coaches as their young professional sport enters the most crucial period in its history.

With no games to play, Jackman decided to link the chain, initially between pals in the coaching community but eventually the most distinguished heads began to appear for online tutorials.

“I got it started by doing one on England’s kicking game,” explained the former Dragons and Grenoble coach, “and why it is so effective.

“It was for seven coaches I already knew; couple of guys in France, couple in South Africa, one in the Premiership and a few more from the Pro 14.”

That was 10 weird weeks ago. The group currently numbers 38 coaches or analysts from boltholes on Rokko Island up onto the Highveld and closer to home.

“Initially we kept the numbers tight because we really wanted an environment where people were willing to share, and not have any fear of their presentation being put on Facebook or Twitter. We wanted to get deep into what people are doing technically and tactically.”

Everyone pulled on their scuba gear for Schmidt’s recent descent into the “heart” of rugby. You may remember the Paul O’Connell story. Up until 2013 the Munster captain could not fathom how Leinster’s breakdown was so airtight, and why they kept beating his team.

Despite horrendous injuries to players like Dan Leavy, World Rugby are not expected to alter the law on how to survive over grounded ball. The current plan - which Schmidt is helping to shape – is to arm referees with enough clarity to safely oversee the torpedo zone.

Unsurprisingly, Schmidt blew their collective minds with the detail and information he unloaded in a one-hour session, but the standard of presentations has been on a steady upward curve. The lean towards secrecy – which is not really a rugby trait due to the nomadic Kiwi coaches – is trumped by a desire to learn.

What’s really special about Jackman’s group is the other coaches and analysts can pepper Pat Lam or Tanabe or Schmidt with questions.

“What ends up happening is everyone shares. The best thing about it has been the internal connections coaches have made. This should help when they are recruiting a player in the future.”

Nobody is handing over trade secrets, rugby’s cold war will never end, but the pandemic has offered rivals an opportunity to climb out of the trenches and smoke a few cigarettes in no man’s land.

“It’s also the first time the southern and northern hemisphere have been completely off at the same time.

“We now have an attack coach for the Stormers, analyst for the Lions, people coaching in Super Rugby in Australia, the Premiership, the Top 14, the Japanese league and even one guy in Moscow.”

Essentially, pro rugby coaching is a web of interconnected New Zealanders and other like-minded wanderers, all seeking to expand their wisdom. For example, Japanese champions the Kobelco Steelers, under Wayne Smith and Dave Dillon, did a root and branch analysis of Gregor Townsend’s Scotland, and vice versa, before sharing the specific weaknesses both unearthed.

“I work with GAA and soccer coaches in Ireland and some of the GAA lads can’t believe that fellas will present their whole cultural philosophy or lineout strategy,” said Jackman.

The reasoning makes sense: any coaching ticket worth their salt will eventually figure out the opposition so sharing of methodology merely forces them to be constantly evolving, which is a key tenet of professional sport.

“We had a great one on the 50/22 rule,” said Jackman of the trial law that rewards a team with lineout possession for finding touch in the opposition 22 from a kick inside their own territory. “We had a guy coaching in Australia’s national rugby championship. There were only two rounds in the season but he gave a presentation showing what coaches are doing to take advantage of the rule. It created a really positive conversation.”

The pressure – that this personality type craves – is very real.

“You don’t want to f**k it up; presenting to your peers is way harder than presenting to players. People keep learning from what’s gone before. Like, Atsushi’s was the best one yet.

“I’m not looking for a job coaching but as a pundit it will help as I’ve managed to get in as much personal development in the last 10 weeks than I did in the previous three years.”

Doubts continue over Solskjær’s tactics against high-class opponents 13:16
Waterford women’s football association ‘first in Ireland’ to own lands 13:00
Time decided football was finally over for Brees. Not for Tom 12:53
Phil Neville to step down as England head coach with immediate effect 12:23
Chiefs survive loss of Mahomes as Brady wins battle of the veterans 12:04
Crossword Get access to over 6,000 interactive crosswords