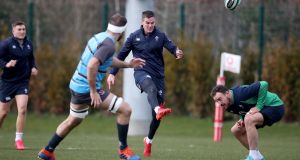 Johnny Sexton has returned to Ireland training ahead of the rescheduled Six Nations meeting with Italy. Photo: Dan Sheridan/Inpho

Ireland head coach Andy Farrell confirmed that Leinster triumvirate Johnny Sexton (hamstring), Ronan Kelleher (quad) and Andrew Porter (hamstring) returned to moderated training on Thursday and will take to the pitch again tomorrow as they ramp up their rehabilitation ahead of the Six Nations Championship match against Italy at the Aviva Stadium in eight days’ time.

Farrell explained: “Obviously they have a few protocols to come through but they are looking good. They trained in a low key session yesterday (Thursday) and got through that absolutely fine. We have a decent session tomorrow and we will see how they go with that but at this moment in time they are progressing very well.”

The Ireland squad convened on Wednesday and have had two training sessions in their bubble at the High Performance Centre at Abbotstown with another scheduled for tomorrow. Farrell described Friday’s run-out as “high level quality and high level intensity.”

He was asked about the qualities that uncapped players like Hugo Keenan, Shane Daly and Will Connors have infused into to the group. “They bring an energy that’s relentless, all three of them that you mentioned have fantastic attitudes and it’s what needed to grow on the international ladder. They have done unbelievably well to get selected but this is the start of their international career.

“They are very hungry for information and their attitude has been first class. It is a difficult world coming into international camp for the first time. They are behind the eight ball because there are a lot of people who have been around for quite some time, who know the set-up and (they) now have to get ready for an international match in a few days.

“It is obviously new to them but they are adapting unbelievably well. The lads are looking after them along the way. The potential is there for everyone to see and we have to make sure that we bring that out.”

Farrell also spoke about his thought process in omitting a number of players who were involved during the Six Nations campaign which referenced the absence of Ulster scrumhalf John Cooney, a replacement in the matches against Scotland, Wales and England earlier in the season. “You have to make a call on what’s good for the team. You look at all sorts of things regarding selection; form, attitude, what the last seven months has looked like, how they have come through that.” He also mentioned Leinster’s Luke McGrath.

The Ireland coach continued: “My job is to select a team that is going to keep everyone on their toes. Competition for places has got to be one of the key factors going forward for this team. I hope that it galvanises them, they come back bigger and stronger and give us a few headaches along the way.”

He was also asked whether, based on the opening three games in the Six Nations, that the players had to take a little more responsibility in the pitch, adopting a more hands-on and heads-up approach to controlling how a match unfolds.

Farrell said: “There is a little bit of an evolution that needs to happen within our game. I think one of our strengths is sticking to the plan. Also one or our works-on would be being adaptable in and around that plan. I want the boys to see the whole picture.

So it’s about empowering the players? “You are trying to educate them on decisions on the different scenarios that they are looking for. The first process has to be to look for them, the second process has to be how to execute and back up that vision.”