Tadhg Beirne and Ross Byrne can join Down Under debutants

In total, 15 Irish players have been handed a first cap in Australia for tour next month 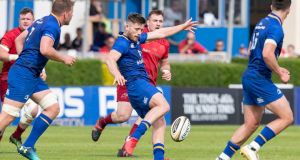 Ciarán Fitzgerald, Keith Wood and Brian O’Driscoll have many things in common from a rugby perspective but perhaps the least well known is that they all made their Ireland debuts in Australia, coincidentally in the city of Brisbane.

Fitzgerald was uncapped when chosen in the squad to tour Australia in 1979 and would have been seen initially as a back-up to Garryowen’s Pat Whelan, who was the starting Irish hooker in the previous 14 Test matches.

Coach Noel Murphy’s Irish side won one, drew two and lost one of their matches in the Five Nations Championship earlier that season. The tour got off to an unfortunate start when prop Ned Byrne was knocked down by a car two nights before the first tour match and ended up with a badly fractured leg; but it was a selection controversy that was to dominate the headlines ahead of the first Test.

Ollie Campbell was preferred to Tony Ward, the then European rugby player of the year, for the first Test. Both had played beautifully on tour but it was Campbell who was handed the number 10 jersey for the first Test against the Wallabies at Ballymore in Brisbane.

He was outstanding as Ireland hammered the Aussies 27-12, scrumhalf Colin Patterson crossing for two tries, with Campbell converting both and kicking four penalties and a drop goal.

The margin in the second Test in Sydney was less emphatic, but once again the Old Belvedere playmaker guided his side to victory, landing a penalty and a brace of drop goals. Campbell, one of Irish rugby’s all-time great players, would remain his country’s first-choice outhalf until his injury enforced retirement in 1984.

There were two other debutants in that first Test, St Mary’s College fullback Rodney O’Donnell and the man who replaced him when he sustained an injury during the game, Frank Ennis; it was the Wanderers fullback’s one and only cap.

The 1979 tour was the second time that Ireland had visited Australia, the first 1967, when an Ireland side captained by Tom Kiernan beat the Wallabies 11-5 with tries from centres Pat McGrath and Jerry Walsh with Kiernan tagging on a conversion and drop goal.

Mike Gibson provides a link between those two successful Ireland tours to Australia. In 1967 he was outhalf on the team that triumphed in Sydney and made his final and what was then a world record, 69th appearance as an outside centre in the second Test (Sydney) in 1977, bringing to a conclusion a career that marked him as the one the sport’s best ever players.

So while Ireland were 3-0 at one stage in Tests on Australian soil, they have subsequently lost all 10 matches against the Wallabies in Oz, including a couple of World Cup matches in 1987 (33-15) – Brian Smith, who scored a try for Australia that day went on to play for Ireland – and 2003 (17-16), a game remembered for O’Driscoll’s tiptoe down the touchline to dot down in the corner.

Wood was one of four debutants in the first Test (1994) alongside Jonathan Bell, David Corkery and Niall Woods while five years later a 20-year old O’Driscoll, who had yet to play for Leinster, was given his first cap by then the Ireland coach Warren Gatland. He wasn’t alone in making his Test match bow as Matt Mostyn and Tom Tierney also wore the green jersey for the first time.

Joe Schmidt’s Ireland squad begin their journey to Australia on Thursday night and will create a little history when they face Michael Cheika’s Wallabies for the first time in a three-Test series, coming on the back of a 12-match winning streak: and for the uncapped Irish tourists, Tadhg Beirne and Ross Byrne the prospect of joining some illustrious company.