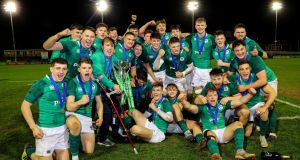 Grand Slam champions; it’s got a nice ring to it. No matter what this group of players goes on to achieve in rugby or life, this triumph will endure into their dotage. It’s been a remarkable campaign, beating the world champions and reigning Under-20 Six Nations title holders, France; accounting for a highly regarded England side; and three victories on the road, culminating in clearing the final hurdle in North Wales in Cheltenham week.

The memories will be vivid, the colour of Cork, the rollicking atmosphere of Musgrave Park, passionate and uplifting, that propelled them to victories over England and France; both fraught end games in which this young Ireland team found a way to win. They stayed true to their rugby principles and it makes the achievement all the more laudable.

In victory they emulated Eric Elwood’s 2007 squad, becoming the second Irish Under-20 side to win a Grand Slam. Not even the loss of their two starting halfbacks, Craig Casey and Harry Byrne, who withdrew through injury on the day of the game, could discommode them, Cormac Foley and Ben Healy stepping into the breach.

Noel McNamara had consistently highlighted the importance of the squad dynamic and in using 30 players during the tournament that was borne out. An Ireland team had never won in Colwyn Bay but that was just one more milestone annexed. Forget about the imperfections of the performance, it was a marvellous triumph.

Ireland made a plethora of mistakes early on, a couple of lineouts going astray, not finding enough distance on clearing kicks and taking a gamble here and there defensively that didn’t come off. They invited Wales into the game and ensured that the home side had a monopoly on territory and possession.

Wave after wave of Welsh attacks were initially repulsed but it wasn’t going to be sustainable indefinitely given the economy of possession: and so it transpired, on 10 minutes the home side claimed the first try of the game through centre Aneurin Owen.

Jake Flannery was flummoxed by Tomi Lewis’s hitch-kick and acceleration on the outside as he raced into the Irish 22 and the Welsh wing drew two tacklers before he released centre Owen to canter over unopposed. Cai Evans kicked a fine conversion.

Ireland almost conjured the perfect riposte on 18 minutes but Scott Penny was denied after consultation with the television match official Stuart Terheege and seconds later Seán French endured the same outcome, again after the TMO had been called into action.

The Irish centre was adjudged to have knocked on in the resulting scrum and Ireland were penalised. Indiscipline was an issue for the visitors in the first quarter. As the errors stockpiled, Ireland were giving the home side free access to their half.

A silver lining was a largely dominant Irish scrum but handling mistakes continued to scupper the visitors’ ambition and they rarely escaped the confines of their half. Two more penalties conceded, this time at the breakdown, the first of which Evans kicked to push Wales out to a 10-0 lead.

It was Ireland’s scruffiest 40 minutes of the tournament but with a minute until the interval they provided a wonderful example of the team’s quality. Angus Kernohan took off, put away just outside the Irish 22, slaloming his way past several defenders.

From a ruck inside the Welsh 10-metre line, the ball was quickly moved to the other touchline and Jonathan Wren turned a half chance into a try with a super change of direction from Penny’s pass. Healy’s conversion gave the half a completely different complexion with the visitors trailing by just 10-7.

Whatever tweaks were made at half-time had the desired effect, hooker Dylan Tierney-Martin, breaking off a lineout maul, spinning out of a tackle and showing good strength to cross for his fifth try of the campaign; it was third time lucky in terms of TMO consultations. Healy’s conversion was a thing of beauty to nudge Ireland 14-10 ahead.

Ireland looked to have added a third try from Kernohan but once again the ‘man-in the-van’ denied them for a fourth time, forward pass, Liam Turner’s to French, a whisker on the wrong side of flat. The visitors had been so good but in the 58th minute switched off defensively and it cost them a converted try.

Healy kicked the re-start out on the full, Ireland were penalised for the umpteenth time at the breakdown but Evans missed one again. Wales should have closed out the game but Welsh replacement Ryan Conbeer chose the wrong option, when a try seemed a formality.

This Irish team doesn’t though know when it’s beaten and Colm Reilly, who only came onto the bench today when Casey pulled out, that produced the tour de force that sealed the outcome, brilliantly spotting a gap at a ruck, racing through it and then outpacing the cover on an arcing run; it was a moment of individual brilliance.

Thomas Clarkson's late try; well that was the perfect ending to a wonderful story.

1 Saudi Arabia-funded takeover of Newcastle United in serious doubt
2 Gerry Thornley: Home and away Six Nations could be its ruination
3 Decision expected next week on staging of College Football game in August
4 Kimmich floats Bayern past Dortmund and seven points clear at the top
5 Coming fourth in the Olympics didn’t change this fearless quartet, time did
Real news has value SUBSCRIBE