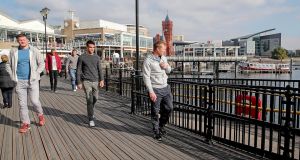 Donnacha Ryan, Conor Murray and Keith Earls all attended St Munchin’s College in Limerick which leads the way with seven in providing senior internationals among the last 100 players to be capped by Ireland. Photograph: Dan Sheridan/Inpho

The American comedian Stephen Colbert once observed: “Facts matter not at all, perception is everything. It’s certainty.”

It came to mind when thinking about the dog-eared assertion that fee-paying schools in Ireland – as determined by the Department of Education official listing for the Republic of Ireland (53) and the websites of the schools concerned in Northern Ireland – contribute more lavishly in terms of past pupils to the Ireland rugby senior team when weighed against the numbers furnished by non fee-paying establishments.

The facts differ somewhat from the perception.

Taking the story up to date is Leinster hooker James Tracy, who became the 1089th to represent his country when coming on as a replacement last November against Canada.

Eight players made their Ireland debuts against the Canucks that day at the Aviva Stadium but their order of listing is determined by those in the starting line-up before replacements and then alphabetically by surname and initials.

Queering the pitch slightly in this defined sampling is a third category, the number of foreign-born players who weren’t educated at second level in Ireland. They are grouped together as a separate entity rather than split between the fee-paying and non fee-playing categories. As the accompanying graphic indicates, there are 18 dating back to Isaac Boss with the most recent debutants Sean Reidy, Quinn Roux and Finlay Bealham.

They are two past pupils clear in the pecking order of the Blackrock quintet of Garry Ringrose, Joey Carbery (he moved to the school for sixth year), Jordi Murphy, Ian Madigan and Luke Fitzgerald.

In all, 42 players of the last 100 to don a green jersey come from just 11 schools, nine of those fee-paying, two non fee-paying. However the Ireland rugby team during the specified period of just over 11½ years, draws down in player terms from 46 different schools with diverse sporting pedigrees, and certainly not all by any means that play competitive rugby.

Tralee CBS (Ultan Dillane), Ballincollig Community School (James Cronin), Coláiste Dun Iascaigh, Cahir (Tommy O’Donnell), St Colman’s College, Fermoy (Mike Ross) and St Mary’s Diocesan School, Drogheda (Niall Ronan) all list rugby as one of their extracurricular activities. It wouldn’t constitute the primary sport in any way but does serve to illustrate that more than a smattering of the internationals come from outside the mainstream rugby schools.

It should also reinforce the important role that clubs play in the development of young players, something that’s occasionally subsumed by the emphasis on the contribution of the schools in playing numbers to the national team.