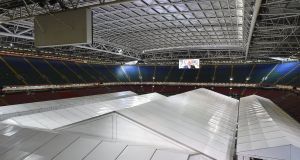 The Dragon’s Heart Hospital is a 2,000-bed field hospital situated within the Principality Stadium in Cardiff. Photograph: Matthew Horwood/Getty Images

Wales will not play at the Principality stadium in Cardiff again in 2020 with the stadium set to remain as a field hospital amid the coronavirus pandemic.

The ground has been converted into the temporary Dragon’s Heart Hospital and is set to continue as a medical facility in case of second coronavirus spike.

The Welsh Rugby Union is in negotiations with the Welsh government and Cardiff and Vale University health board to keep the temporary hospital in place until autumn, and then have the stadium back as a rugby venue for the 2021 Six Nations.

“Whilst we expect to replay our postponed Guinness Six Nations 2020 fixture with Scotland, the competition format and opposition for additional autumn games are yet to be agreed,” chief executive Martyn Phillips said in a WRU status update.

“What is certain is that we will not be playing any home games at Principality Stadium.

“Our decision to step in to provide a location for a surge hospital at the height of the pandemic, along with the scale of the investment to construct the Dragon’s Heart hospital in the stadium, has meant that we have agreed in principle to extend the hospital until the autumn.

“We have yet to finalise a contract on the extension, as, this time, it is a little more complex and there are a number of circumstances that need to be covered. We hope to sign the contract shortly.”

“On a more optimistic footing, we plan to be back playing at the Principality Stadium – hopefully in front of full crowds – against England and Ireland in the Six Nations in February 2021.”

Wales were due to be playing the rearranged Six Nations match against Scotland in Cardiff on October 31st ahead of an autumn series against South Africa, New Zealand, Fiji and Argentina.

While the Scotland fixture is expected to be played on the same date, an eight-team tournament involving the Six Nations sides and two countries out of Fiji, Japan and Georgia now looks set to replace traditional autumn games against southern hemisphere opposition.

Wales’ autumn games could take place in front of some crowds at London venues, possibly at the London Stadium, Tottenham Hotspur Stadium, Twickenham or Wembley.

Phillips said: “Assuming games are staged this autumn, if restrictions mean we are playing behind closed doors those games are likely to be staged in Wales and we are exploring a range of options.

“If the games can be staged with crowds in some form those games are likely to be in and around London and, again, we are exploring a range of options.

“The most difficult scenario will be if games are allowed with crowds in England but not in Wales.

“There are clearly a range of risks here, not least Welsh fans leaving Wales to attend a game and then returning. Clearly this risk also occurs for away games.

“We very much hope by the autumn that restrictions, whatever they be in relation to sports events, are aligned across the UK.

“The reality is we continue to juggle a number of unknowns. We hope for news on these fixtures in the coming weeks.”

In the northern hemisphere, this window will accommodate the postponed men’s and women’s Six Nations matches at the end of October and a rest weekend on November 7th.

A tournament involving the Six Nations and invited teams hosted in Europe would be held from November 14th to December 5th.

The 2020 Rugby Championship in the southern hemisphere will be hosted in a single country between November 7th and December 12th.

A World Rugby statement said: “The rescheduling of the domestic, European and international calendars will accommodate the ability for the professional clubs to have access to their star southern hemisphere international players for the completion of the postponed and rescheduled 2019-20 seasons at a time in which they would have ordinarily been on international duty in August and September.

“The recommendation to temporarily change the existing windows will be tabled at a virtual meeting of the World Rugby Council on July 30th.”

1 Tour de France: Every yellow jersey winner must feel guilty by some association
2 Kevin Babington: Learning to live again after life changed forever on Long Island
3 Clifford brothers to the fore as East Kerry retain title
4 Matt Williams: The sky is not falling in on Irish rugby - but Ireland do need a new plan
5 Juan Imhoff and Racing 92 leave it late to end Saracens’ reign
Real news has value SUBSCRIBE