The Offload: Even the best struggle when relocated

Ulster set for quick return to full contact; Jones looking to other sports for lessons 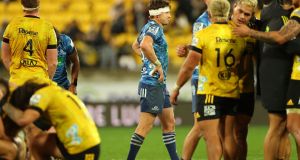 After watching Beauden Barrett’s struggles in the Super Rugby Aotearoa match between the Blues and the Hurricanes at the weekend this column was struck by how difficult it can be to relocate a player from one position to another no matter how exceptional an athlete and brought to mind a couple of former Irish internationals in Paddy Wallace and Jeremy Staunton.

Barrett has won eight of his last nine caps for New Zealand at fullback having played outhalf – he was a two-time World Player of the Year – for the vast majority of the 83 caps that he has racked up for the All Blacks. Richie Mo’unga took over the 10 shirt in the national team at the tail end of the Rugby Championship last season and for five of the six games at the Rugby World Cup in Japan.

Barrett’s recent move from the Hurricanes to the Blues has perpetuated his role at fullback. On Saturday he suffered a torrid opening 40 minutes, skinned on the outside by Ngani Laumape for the Hurricanes first try and then dumped on his backside as the same player ran through him on another occasion.

In between Barrett scored a gorgeous try, when working out of his old position at outhalf on foot of a beautiful show-and-go. There can be a law of diminishing returns on relocating an outhalf.

Wallace and Staunton were brilliant young outhalves but those positions at Ulster and Munster initially belonged to David Humphreys and Ronan O’Gara respectively. To accommodate players of their ability, Wallace and Staunton ended up playing fullback and, in the former’s case, centre for some of their formative years in senior rugby.

Their talent allowed them to play international rugby but perhaps not to the level and with the same impact as they might have managed in the 10 jersey. Irish rugby contains some excellent young outhalf prospects. Not all can be accommodated with sufficient game time in the 10 shirt. The upcoming season promises some interesting decisions.

“I’ve been very impressed with Jack Crowley. He’s a natural ball player and he just looks like a rugby player. Certain guys just look like rugby players and he’s going to be good.” Munster coach Johann van Graan on the outhalf, while also singling out another Academy prospect secondrow Thomas Ahern, both of whom starred for the Ireland 20s.

38: The number of players in Leinster’s current squad of 46 who have come through the Academy portal in the province.

Ulster coach Dan McFarland has explained the challenges that the Covid-19 pandemic has imposed upon trying to prepare a professional sports team for the resumption of rugby next week as the players literally get to grips with each other for the first time this week.

“In terms of a return to contact, that will start on a gradual basis. The first week there will be a little more contact, and then the following week, tackling, rucking and a certain degree of lineout work will be introduced.

“After that, we’ll move into scrums and mauls. The IRFU has helped the provinces develop that graduated return and we’re looking forward to it. I personally can’t wait until we get back into scrums!

“Combining training with our understanding of all the protocols to keep people safe is difficult. We’re doing it in an environment we haven’t been in before. Preparing an elite team to play in a competition is another test. We’ll go straight into two interpro games which are very important. There will be no pre-season warm-ups, which will be challenging, but all the other teams are dealing with this as well and it’s something we relish.”

Jones looking to other sports for lessons

It is pretty commonplace for coaches to look outside of their particular sport and England’s Eddie Jones is no different.

The 60-year-old Australian who took a 25 per cent pay cut as the English RFU faces projected losses of £107 million with 139 redundancies in the organisation to boot, has dismissed reports linking him with a number of other jobs and instead chose to focus on his desire to look outside rugby in developing as a coach.

He said: “I started with (GB) hockey, with Danny Kerry, Gareth Southgate in soccer, Dave Brailsford in cycling, Justin Langer and Ed Smith the England selector in cricket.

“I’ve been picking his brains because I think they’ve done a fantastic job in the last period of time. Ed and I have spoken on a number of occasions and I find him a very bright and intuitive guy. He’s got a bit of a different look on how to do things.”

A tough taskmaster, Jones shows no signs of mellowing, arguing that an important tenet of his coaching philosophy is that while it is important for players to have fun, for them to be good, “you have got to make them uncomfortable.”

1 Next stop the Champs-Elysées in green for Sam Bennett
2 Born to ride, born to win: Sam Bennett, the making of a green machine
3 Saracens’ emphatic opening salvo enough to keep Leinster at bay
4 Saracens deliver the brutal blueprint on how to beat Leinster
5 Matthew Wolff leads US Open but Rory McIlroy is among the chasing pack
Real news has value SUBSCRIBE