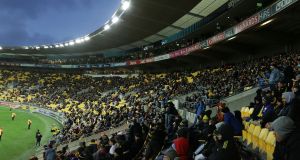 Fans in Wellington watch the Hurricanes take on the Highlanders earlier this week. Photograph: Inpho

New Zealand Rugby (NZR) said on Friday its board had committed to establishing a new professional team competition in 2021 with eight to 10 sides, including a Pacific Island squad.

NZR had formed a committee in April with its five Super Rugby teams to review operating models and plot the way forward for the domestic game, amid a shutdown in global sport because of the novel coronavirus.

Outlining the findings of its review called “Aratipu”, the Maori word for growth, NZR chief executive Mark Robinson said the board had approved recommendations for the competition.

“Coming on the back of Covid-19 and its impact on future competitions, the NZR Board has committed to establishing a new professional team competition in 2021,” Robinson said in a statement.

“We have also been heartened by the success of Investec Super Rugby Aotearoa. The focus is now on confirming licenses for New Zealand’s five current Super Rugby clubs and that work is now underway.” Robinson said it was a priority to have a Pacific Island team take part.

“There is a huge desire to have a Pasifika team involved which we think will be massive for the competition, popular with fans and is a priority for us,” he said.

“To have a team that would provide an additional pathway for Pasifika players to perform on the world stage would be hugely exciting.”

Robinson said that NZR would work with Rugby Australia to seek expressions of interest from its clubs and other interested parties to join the competition.

It would also consult Sanzaar - the governing body of Super Rugby which includes the Australian, South African and Argentine rugby unions, he said.

1 Ireland 23 Georgia 10: How the Irish players rated
2 Ireland grind their way to grisly win over Georgia
3 Sordid murder of hurling brothers still resonates in south Galway
4 Car sliced in half but Grosjean survives huge crash at Bahrain Grand Prix
5 Jim McGuinness: There is a way to save championship and make it competitive
Real news has value SUBSCRIBE