Gerry Thornley: World Rugby’s problem is that refereeing is not an attractive career path 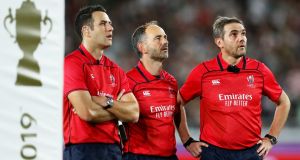 Who’d be a ref? And who, to give it its full title, would be World Rugby’s ‘High Performance 15s Match Officials’ Manager? After Alain Rolland stepped down from the latter role last week, the game’s governing body now has an opportunity to perhaps overhaul the structure around refereeing and address the declining standard of rugby officiating. This is one of the biggest worries in the game.

Joel Jutge was Rolland’s predecessor and also stepped down after four years, which perhaps should tell us and World Rugby something, namely that the job is too big for one person.

No referee coming in to such a job to begin with will have been universally popular after a career on the pitch and then trying to bridge the divide between the hemispheres in the heavily politicised landscape of World Rugby, with all the attendance travel, is hugely onerous.

Tellingly, Jutge chose to become European Referee Manager and, likewise, it’s hard to believe Rolland only envisaged staying in the role for four years when he started out in 2016.

Even the appointment of match referees is heavily politicised, having heretofore been chosen by a panel of three, headed by Rolland, along with European referees chief Jutge and the Sanzar referees’ chief Lyndon Bray.

More so than other sports, rugby is overtly influenced by the performances of referees, in large part because so many laws are down to interpretation and, as a result, there are so many 50-50 calls.

The wildly fluctuating standards of officiating between countries, while not new, does emanate from the efforts, investment in coaching and quality of personnel within the respective Unions. The game reaps what it sows.

So let’s give credit where it is due, it’s surely no coincidence that French officiating has been at something of an all-time high in the last one or two World Cup cycles and this is due to the focus of the French Federation and, most probably, the influence of Jutge, who is widely regarded as a high class operator.

Given French referees were once considered something of a joke, this is quite a turnaround and with Garcès now moving into the FFR to oversee refereeing, those standards are likely to be maintained.

Steve Hansen was recently still bemoaning Poite’s change of decision in the endgame to the third Lions’ Test recently, and how the New Zealand rugby public demonised Barnes after the 2007 World Cup quarter-final in Cardiff.

However, you don’t hear them complaining too loudly about Craig Joubert’s performance in the 2011 final in Eden Park. In all probability, if it wasn’t for the presence and strength of French officials, compared to their Australian and South African counterparts, the Lions would never have achieved a drawn series.

It’s not just that they are good match officials, they are also good communicators. Their command of English, or at any rate “rugby English” is vastly better than the English-speaking referees. When going to the TMO, they even converse in English.

By contrast, the New Zealand Rugby Union have cut back significantly on their investment in referees, which Bryce Lawrence now oversees as the sole full-time appointment.

Disappointingly, both the last World Cup and the Six Nations were the first without a single Irish referee after both George Clancy and John Lacey failed to make the cut. It’s not that the IRFU have cut back on their investment in refereeing. Dudley Phillips is the Union’s referees’ chief, Lacey is the elite referees coach, David Wilkinson heads up the domestic game, and there are also four regional development officers.

The Scottish RFU appointed the South African Tappe Henning as its referees’ commissioner in 2013, and he brought in Dave Pearson as his assistant but they still have produced a good frontline international referee since Jim Fleming.

The decline in standards seems particularly stark in the southern hemisphere. Where before South Africa provided the game with Andre Watson, Jonathan Kaplan and Criag Joubert, now there is only Jaco Peyper.

The Australians did produce Nic Berry, who looks potentially very good, and Angus Gardner, but as evidenced by the contrasting standards in the domestic competitions in Australia and New Zealand, officiating in the latter is still well ahead of their neighbours across the Tasman.

New Zealand players and referees have adapted better to the significant changes in the laws at the breakdown have made the game both quicker and safer, particularly for the jackaler with side entry being outlawed so severely. And the penalty count has come down.

So that will be one of Rolland’s legacies. But a major part of the problem facing World Rugby and the game is that refereeing is not a particularly attractive career path, and presumably little or nothing about the pandemic will change that.

The job comes with plenty of demands and pressure, is not especially remunerative and has a limited time span. Some referees are paid as little as €35,000 or €45,000, plus modest expenses. Save for one or two exceptions, this is not exactly a retirement fund.

Furthermore, Nigel Owens is still refereeing at 49, but that is bucking a trend which generally sees officials retire in their mid-40s. He at least has played the social media system well and has an after dinner speaking career. And good luck to him. He’s also the most capped referee in the history of the game, having overseen 98 Tests, and he should not only be given at least another two internationals, but World Rugby should make quite a fanfare over it.

Wayne Barnes is next highest on 90, and is still only 41. He has seemingly been encouraged to promote his profile rather more of late, judging by TV appearances, and can also supplement his income as barrister, if only on a part-time basis until he retires.

But will they be lost completely to the game as so many former referees have been, rather than utilise their experience to broaden the game’s reach.

The onus is now firmly on World Rugby to make refereeing both a more appealing job and to improve standards. And, more than ever, to invest in referees.

1 Ken Early: Handball ‘crisis’ a timely distraction from the grim bigger picture
2 GAA Championships await and we need a button for the buzz of the crowd
3 49 and out for Corofin as their long Galway reign is ended
4 Arctic conditions in Ballymena and snowflakes in Paris
5 Tour de France: Every yellow jersey winner must feel guilty by some association
Real news has value SUBSCRIBE

The Offload: Springbok heavyweights heading for Pro14 10:02
All in the Game: No sympathy from Bruno Fernandes 10:00
Ballymun claim Dublin title as Corofin beaten; Man City thrashed by Leicester 07:35
Ken Early: Handball ‘crisis’ a timely distraction from the grim bigger picture 06:00
GAA Championships await and we need a button for the buzz of the crowd 06:00
Crossword Get access to over 6,000 interactive crosswords