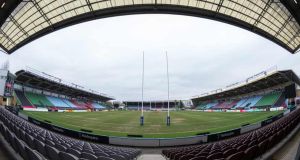 The Stoop, one of the venues for the Women’s Six Nations. World Rugby is considering banning trans women from playing women’s rugby. Photograph: Bob Bradford/CameraSport via Getty Images

World Rugby is considering banning trans women from playing women’s rugby because of significant safety concerns that have emerged following recent research, a decision that would make it the first international sports federation to go down that path.

The Guardian revealed that in a 38-page draft document produced by its transgender working group, it is acknowledged that there is likely to be “at least a 20-30 per cent greater risk” of injury when a female player is tackled by someone who has gone through male puberty. The document also says the latest science shows that trans women retain “significant” physical advantages over biological women even after they take medication to lower their testosterone.

As a result, World Rugby’s working group suggests that its current rules, which allow trans women to play women’s rugby if they lower their testosterone levels for at least 12 months in line with the International Olympic Committee’s guidelines, are “not fit for the purpose”. The draft proposals are likely to be seen by women’s groups as an important new approach towards the sensitive issue of trans inclusion, one based on biological sex and the latest science rather than how someone identifies.

While the draft proposals may not get such a positive welcome from trans rights groups, the draft document acknowledges that the working group will consider its position if the scientific evidence changes. It also recommends that trans men should be allowed to play against biological men, provided they have undergone a physical assessment and have signed a consent form.

The draft proposals, which have been sent for feedback to individual unions, are a result of a wide-ranging consultative process that began with a ground-breaking meeting in February with leading scientists, medical and legal experts as well as representatives of trans and women’s groups in an attempt to create a consensus around the latest research while also considering player welfare and inclusivity issues.

Crucially the draft proposals, which have been seen by the Guardian, accept that anyone who has gone through male puberty retains a significant physical advantage after their transition. It also recognises that the advantage is so great – and the potential consequences for the safety of participants in tackles, scrums and mauls concerning enough – it should mean that welfare concerns should be prioritised.

“Current policies regulating the inclusion of transgender women in sport are based on the premise that reducing testosterone to levels found in biological females is sufficient to remove many of the biologically-based performance advantages,” the draft report says. “However, peer-reviewed evidence suggests this is not the case.

It adds: “While there is overlap in variables such as mass, strength, speed and the resultant kinetic and kinematic forces we have modelled to explore the risk factors, the situation where a typical player with male characteristics tackles a typical player with female characteristics creates a minimum of 20% to 30% greater risk for those female players. In the event of smaller female players being exposed to that risk, or of larger male players acting as opponents, the risk increases significantly, and may reach levels twice as large, at the extremes.”

Crucially those advantages are not reduced when a trans women takes testosterone-suppressing medication, as was previous thought - “with only small reductions in strength and no loss in bone mass or muscle volume or size after testosterone suppression”.

However, World Rugby says it is committed to encourage transgender people to remain involved with rugby and is currently funding research to continue to review any evidence that may emerge to enable the participation of transgender women in women’s rugby. “At the present time, however, based on the best published scientific evidence, that position is unsupported,” it adds.

The proposals also recommend that transgender men should be allowed to play against other men – provided they get a physical assessment and a therapeutic-exemption-use certificate and sign an statement accepting they understand the greater injury risks.

A draft version of the waiver for transgender men to sign, seen by the Guardian, says: “I acknowledge and accept the injury risks associated with transgender males playing contact rugby with males who are statistically likely to be stronger, faster and heavier than transgender males, as described in the World Rugby Transgender Guidelines which I have read and understand.” – Guardian