Pool B: Canada last but not least in qualification for Japan 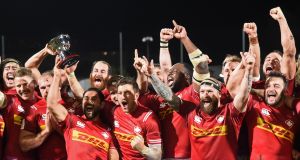 Canada were the 20th and final qualifier for Rugby World Cup 2019, beating Hong Kong 27-10 in the final match of a Repechage tournament in Marseille and in doing so joined USA, Uruguay, Russia, Fiji, Tonga, Samoa and Namibia in qualifying for Japan as opposed to being automatically guaranteed a place. Although they have fared much better than the USA in World Cups, their neighbours have won nine of the last 10 games between the countries, illustrating a shift in the balance of power in North America. Canada also endured a difficult Pacific Nations Cup campaign, suffering three defeats out of three to the USA, Fiji and Tonga - albeit all on the road. Not enough to inspire much hope in Japan.

Kingsley Jones, a former Welsh openside flanker who won 10 caps for his country in the 90s, played rugby for Ebbw Vale and Pontypridd before moving to England and lining out with Gloucester, Worcester and Doncaster and he succeeded former Ulster coach Mark Anscombe as Canada’s head coach in 2017, having previously been in charge of the Russian national team.

Tyler Ardron, once of the Ospreys but now with the Super Rugby franchise the Chiefs with whom he signed a two-year contract extension earlier this year. The six foot, four inch backrow prefers to play at number eight, which he generally does for the national side. He’s already made an impression in New Zealand with his powerful carrying and ball skills. He captained Canada in the RWC in England four years ago but injuries curtailed his involvement.

DTH van der Merwe has enjoyed spells at the Saracens, the Scarlets and Newcastle Falcons but it is at the Glasgow Warriors that he established his reputation as a top class wing; he is the club’s record try scorer. The 33-year-old South African born international has been unlucky with injury, five shoulder operations an illustration of that misfortune but he is a lethal predator, strong, powerful and quick as he demonstrated four years ago in England when scoring tries against Ireland, France, Italy and Romania.

Not so much moment as the 1991 tournament in its entirety as Canada qualified for the quarter-finals with victories over Fiji and Romania and a narrow 19-13 defeat to France in Agen. Even when faced by the mighty All Blacks in the last eight they proved to be doughty opponents in going down 29-13 with one of their try scorers that day, the recognizable figure of Al Charron.

The 26-year-old former Ireland underage international Peter Nelson agreed to join the squad earlier this year having qualified through his grandmother and although better as a fullback, he’ll probably be earmarked for the number 10 jersey. He’ll dispute the position with another Irish born player, Cork’s Shane O’Leary. Canada could have up to 15 players in the squad who last played at the World Cup. The Namibia match looks like being their best chance of success. although the Pacific Nations Cup won’t have given them much hope.