All Blacks hopeful Brodie Retallick will be fit for World Cup 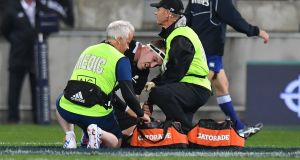 All Blacks coach Steve Hansen is hopeful lock Brodie Retallick will be fit for the Rugby World Cup despite dislocating his shoulder against the Springboks on Saturday.

Retallick was cleared out in a ruck by Springboks opposite RG Snyman and landed awkwardly on his left shoulder. He was in visible pain as he walked off in the 61st minute of the 16-16 draw at Wellington Regional Stadium.

Hansen did not give a timeline for his return to reporters on Sunday but sounded optimistic the former World Player of the Year would be fit to travel to Japan for the September 20th-November 2nd showpiece.

“Hopefully he will be available for the World Cup. He is one of our best players so that’s good,” the coach said.

The absence of Retallick would be a massive blow to Hansen’s plans for the World Cup, with Scott Barrett still on the sidelines with a broken thumb, although the coach added the 25-year-old would have a scan on Monday.

Hansen’s depth in the second row falls away after Barrett with Patrick Tuipulotu having struggled to assert himself at international level in the past two years.

Jackson Hemopo has impressed in his four test appearances since he made his debut last year and could partner Sam Whitelock against Australia in their final Rugby Championship match in Perth on August 10th.

Hansen, who culls his squad from 39 to 34 on Wednesday, added that Retallick’s injury could change their thinking in terms of the mix of the locks and loose forwards ahead of the World Cup.

At the last World Cup, he took only three locks in order to add a sixth loose forward and is still looking for someone who can play lock or blindside flanker, with Hemopo and Vaea Fifita in contention for that role.

Hansen added the team’s playing style was still evolving and despite the numerous errors in execution on Saturday when they tried to force passes or keep the ball alive rather than reset play, all of the statistics after the game were positive.

The world champions beat 28 defenders, to the Springboks’ 11, while they made 16 clean breaks to South Africa’s four, indicating that they were able to break down their defensive line and create opportunities.

“We have to accept we will be rusty,” Hansen said.

“It’s eight weeks (until the World Cup). It’s not so much the games, it’s the time together. We have got a camp in Japan after we play Tonga. We have got two games and two weeks together coming up, so that time is magic.

“We can see a fair bit of daylight at the end of the tunnel, we just have to be patient.”